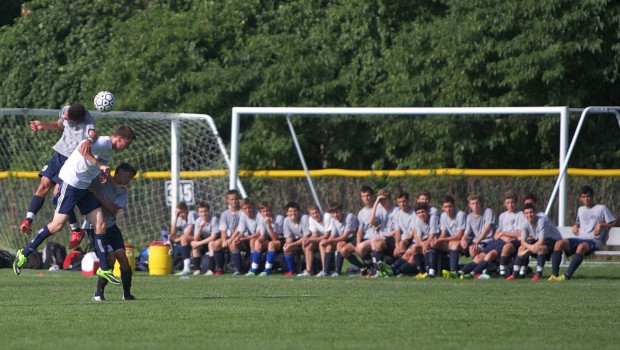 The Friday before Labor Day is traditionally reserved for the Wethersfield scrimmage.

Traditionally, it’s always a good test for both teams.

The Wreckers showed signs of a demanding pre-season. They were not as sharp as 2 days earlier, against Fairfield Prep. But they battled back twice from deficits, earning a 2-2 draw with the upstaters.

The Eagles forced keeper Noah Schwaeber into a fine save at the 10-minute mark. An Andrew Puchala header just missed, but Wethersfield tallied almost immediately off a restart.

Eight minutes later Joe Pravder alertly picked off an errant pass, then cruised 40 yards to goal. He finished with aplomb, past the onrushing keeper.

Wethersfield’s free kick from midfield bounced over the defense and into the net, but Staples equalized again 4 minutes later. Patrick Beusse delivered a great low cross, which Jack Scott headed in authoritatively.

The rest of the 90-minute match finished scoreless. Both squads substituted liberally in the final 30 minutes.

The Wreckers’ next pre-season match is Tuesday at 4 p.m., vs. Newtown at Treadwell Park. George Kokkalis and Gabe Pensak defend, as a horde of 2013 candidates look on. (Photo/Kim Lake) It looks like Nate Argosh’s shirt is being pulled — but he’s doing it himself. (Photo/Kim Lake)