The death on Thursday of Pele — the brilliant Brazilian player who transformed soccer internationally, then brought his magic to [… 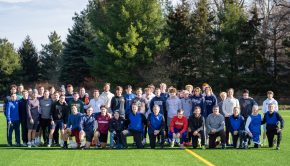 The Wreckers begin the state tournament on Tuesday (brackets announced Friday). But The Turkey Bowl — a decades-old tradition for [… Battling for spots in both the FCIAC and state tournaments, the Wreckers needed a great game tonight. They got it. [… Homecoming, brilliant fall weather and a pre-game speech from principal Stafford Thomas sparked Staples to their best start-to-finish match of [… Before the season — and through the first couple of games — Staples fans wondered: What was the character of [… Over 60 hopefuls descended on Wakeman Field today, for the first day of varsity and reserve tryouts. More than 2 [… Rosters are set for this summer’s Watermelon Cup. Play begins July 6 at 6 p.m. at Wakeman turf, and continues [… A magical season ended harshly for Staples. The Wreckers possessed and controlled mightily against Farmington tonight, at Waterbury’s Municipal Stadium. [… All tickets for Wednesday’s state tournament semifinal match vs. Farmington at Waterbury’s Municipal Stadium must be purchased online. Click here [… Staples soccer is built upon tradition. Some date back to the program’s founding in 1958. Some are newer. One of [… Today’s match held the promise of what high school soccer should be about. A large crowd — including alumni from [… Scenes From A 6 AM Session

Staples varsity and reserve tryouts continued for a second morning, again at 6 a.m. Once again, the 54 candidates were […