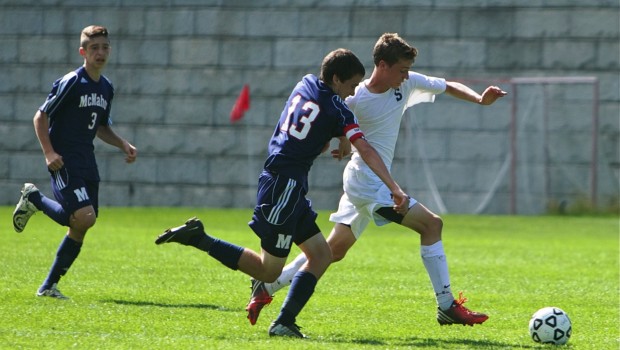 It was a perfect Staples soccer Saturday morning: Brilliant sunshine. Crisp early fall weather. A nice crowd on The Hill, with Loeffler Field in fantastic condition below.

There was just one problem: The Wreckers were missing 5 starters.

Co-captain Diego Alanis (knee) was the latest addition to the injury list, which grew to include early reserve Andreas Bru during warmups. Also unavailable: center back George Kokkalis.

Today’s match would test 2 things: Staples’ depth, and their mentality.

The rejiggered lineup featured a back line of Andrew Puchala, Kenji Goto, Charlie Leonard and — making his 1st-ever varsity start — sophomore James Lewis. Only Puchala — the very tough, hard-heading and high-scoring junior — had started the season on defense.

The hosts pressed from the start. Their cohesive pressure paid off at 7:05. Reid’s corner kick was headed goalward by Puchala. Pravder’s challenge caused the keeper to bobble the ball. Scott — the co-captain, back for only his 2nd game since his own injury layoff — headed alertly but gently over the back-pedaling keeper.

Six minutes later it was 2-0. Scott was fouled at the corner of the box. Shahin laced a ball across the goalmouth, where Puchala power-headed it home.

The Senators halved the deficit midway through the half. Brian Ocampo met a bouncing ball, striking solidly just inside the far post.

Daniel Perez Elorza and Graham Gudis came off the bench, providing wide flank play — and helping with goal #3. Perez Elorza earned a corner kick. Fellow sophomore Gudis took it, finding Puchala’s head. The ball neared the goal line, with Perez Elorza making sure by finishing with his own header.

Staples’ defense was under a bit more pressure in the 2nd half. But with Leonard tackling hard, Lewis and Puchala holding the middle and Goto going to every ball, the Wreckers weathered the storm. Noah Schwaeber’s superb save in the 67th minute was the closest Brien McMahon came to another goal.

Three minutes later, Reid drew a foul at the edge of the box. He took the direct kick himself, sending a perfect ball to Daniel Boyce. He made his varsity debut a memorable one, finishing with authority.

Sebo Hood and James Rubin saw their 1st varsity minutes too, playing tight defense in front of keeper Brenden Price, also on for the 1st time.

Staples was not done yet. With 2 minutes to play, Pravder sliced a corner kick into the box. Perez Elorza — on the goal line — backed it in, for his 2nd tally of the day.

Head coach Dan Woog was pleased with his team’s performance — “especially considering the circumstances.” He cited smart, tough play from all 19 available players; the flexibility of players like Shahin, Beusse and Leonard, all of whom have played several different spots this year, and the winning mentality his team has shown.

“The guys are organized,” Woog said. “They’re committed. They train well, and improve every day. We said after the game, ‘We’re still in September. There’s a lot still to accomplish. And we can’t wait to do it.'” FINAL SCORE: Staples 5, Brien McMahon 1. Season record: 6-1-1.

QUICK KICKS: Beusse won the Man of the Match “nail” for his aggressive, possessive play as outside and central midfielder…

The Wreckers outshot the Senators 18-8, and had a whopping 10-1 advantage in corner kicks….

1982 state champion goalkeeper Rob Sweetnam ’84 was at yesterday’s training, and today’s match. He is now a golf pro in Pinehurst, North Carolina…. Patrick Beusse has a great game at both flank and central midfield versus McMahon. (Photo/Kim Lake)