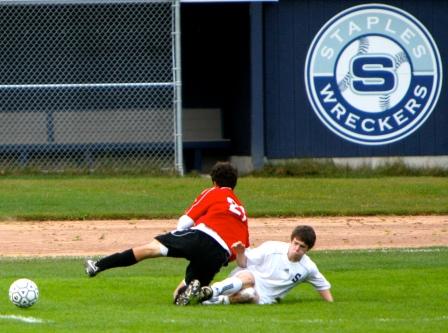 Each year, the Connecticut Interscholastic Athletic Conference (CIAC) and Connecticut Association of Schools (CAS) honor 2 seniors — 1 boy and 1 girl — from each high school in the state, as Scholar-Athletes.  Awardees must exhibit exemplary athletic and academic careers; personal standards and achievements that are models for others, and high levels of integrity, self-discovery and courage.

Jack’s athletic accomplishments are legion.  He helped lead the Wreckers to 1 state and 2 FCIAC soccer championships; numerous indoor track titles, and 2 FCIAC baseball championships (so far).  A starter since freshman year, he was the MVP of last spring’s FCIAC baseball tournament, and is continuing his hot play as this year’s squad contends for more titles.

Off the field, the 1st honors student is a talented writer, who serves as sports editor (web) for Inklings. He is also the only 3-time champion in Staples dodgeball history.

Two of Jack Hennessy's 3 sports are captured in this photo.