Jack Hennessy ’10 Reflects On His BC Career

After graduating from Staples as a multi-sport, multi-state and FCIAC champion — in soccer, indoor track and baseball — Jack [… 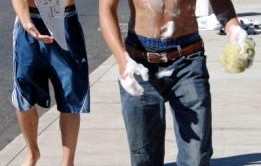 Jack Hennessy ’10 keeps racking up captaincies. After leading the Staples soccer team to the 2009 state championship — and [… It’s tough to repeat. Jack Hennessy accomplished that feat as FCIAC champion — with both the soccer and baseball teams. [… Michael McCarthy has been awarded 2 of Westport’s most prestigious scholarships. The state championship goalkeeper — who continues his career [… Jack Hennessy — the soccer, indoor track and baseball captain — has added another credential to his sparkling resume. Staples’ [… They said it couldn’t be done. But they don’t know Jack Hennessy. The  captain of the state champion soccer team, [… Jack Hennessy and Sean Gallagher are as fast indoors as they are outside. The senior and junior helped pace the [… When the chips were down, the soccer players came through. Captain Jack Hennessy’s disqualification — he allegedly veered out of […