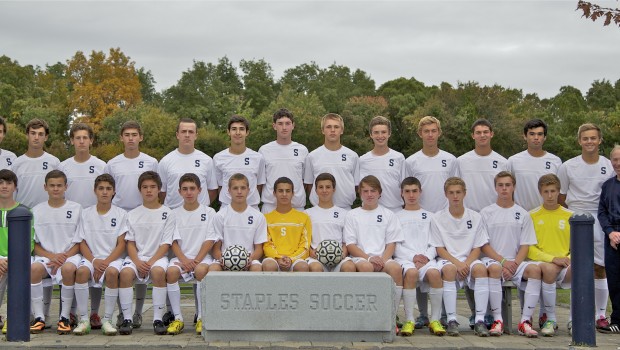 For the 12th time in 14 years — and the 6th season in a row — the Staples boys soccer program has been honored with a national award for academic excellence.

The National Soccer Coaches Association of America gave the Wreckers a Team Academic Award — one of only 2 boys public high school soccer teams in Connecticut to be so named. The other was Ellington High.

To qualify, a squad must have a 3.25 grade point average of all varsity players. The award is given for the previous academic year. In 2013, Staples’ varsity players had an average GPA of 3.43. Of the Wreckers’ 12 Academic All-America awards, that was by far one of the highest average GPAs.

“I’ve always said that our players are some of the smartest and most creative people at Staples,” said head coach Dan Woog. “We want our guys to be as strong in the classroom as they are on the field. What’s especially gratifying about this award is that it’s won as a team. I’m proud that the NSCAA recognizes our team as one that strives for academic excellence.”

The Wreckers are not only strong scholastically, of course. The 2013 team had an excellent year, advancing to the state quarterfinals. Woog said that the 2014 side should also qualify for the Academic All-American honor.