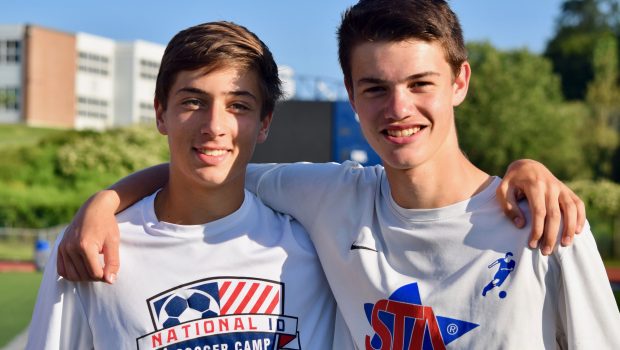 The 60 sophomores, juniors and seniors trying out for this Staples soccer varsity and reserve squads were ready at 7:30 this morning.

The coaching staff set a cutoff of 12:19. Every returning player met that mark — and most potential varsity players did too. Those who did not will enjoy 6 a.m. Sunday fitness sessions with Chris O’Dell.

The candidates then headed to Wakeman, for the a field session. Double sessions continue through the first scrimmage: Tuesday, August 29, 3 p.m. against Fairfield Prep (Wakeman Field).

“The captains (Matt Engler and Chris Martenson) did an excellent job in the off-season,” says head coach Dan Woog. “The STA pre-season camp helped a ton too. Guys came in fit, enthusiastic and ready to get started. This is a hard-working, serious bunch. The coaching staff can’t wait to begin working with them.”

Thomas Nealon ’17 was on the sidelines. He talked to the group after the first session, encouraging them to work hard, have fun — and get the most out of another special Staples soccer season.