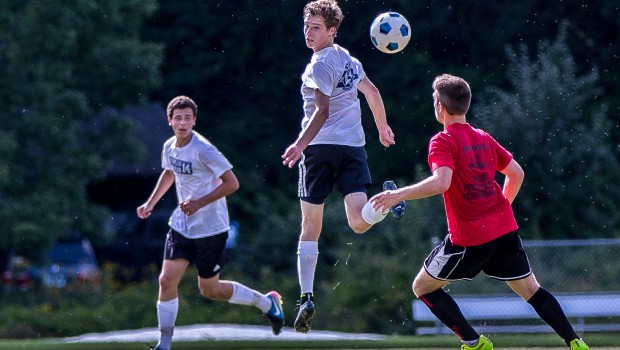 What a difference 48 hours makes.

The Staples boys soccer team followed its disappointing 2-2 draw with Fairfield Prep with a much improved performance at South Kent this afternoon. The Cardinals — reigning New England prep school champions (and winners of 6 of the last 8 titles) — are a very well-organized, talented and athletic side. Their roster is studded with players from around the globe, some taking a post-graduate year.

Playing their 1st match ever on their new field, South Kent scored 2 excellent goals. But the Wrecker coaches were pleased that the blue-and-whites showed far better and smarter organization (particularly defensively), and stood up quite well to their high-powered hosts. Gabe Pensak, Michael Reid and Patrick Beusse — along with sophomore Daniel Reid, in his 1st start — looked particularly strong for the Wreckers, on both sides of the ball.

There was no letup when the reserves took the field, for the final 30 minutes. With the starters roaring them on, they pressured South Kent nearly the entire time. Aidan Wisher nailed down a flank defensive spot, while Luca Cocito and Sebastian Wick combined well up top.

“This was a vastly difference performance than Wednesday,” said head coach Dan Woog. “We are nowhere near where we want to be. We’ve concentrated on defensive work; our attack is next. But this was a very important match for us, against a very worthy opponent.”

Another equally strong foe comes to Loeffler Field on Sunday (1 p.m.). Martin Luther King is the defending New York City champions — and winners of 14 titles in the last 17 years. That’s one more test in the toughest pre-season schedule in Staples history.