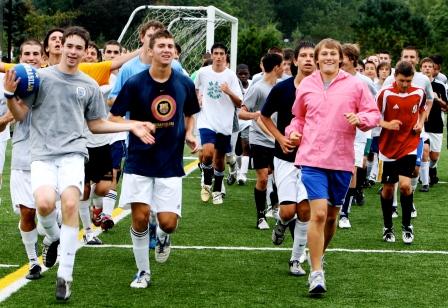 Continuing a tradition begun last year, Staples’ 2010 pre-season schedule will include a trip to Glastonbury.

Last year the Tomahawks invited the Wreckers north, for 45-minute games against themselves and Naugatuck.  This year’s event is set for Tuesday, September 7.

“Naugatuck is always strong,” said Staples head coach Dan Woog.  “And of course Glastonbury is one of the top programs in the country.  We’ve had some great battles over the past couple of years, and this strengthens our relationship even more.  I know both Mark (Landers, the Glastonbury coach) and I look forward to this as a key part of pre-season.”

In a much older tradition, the Westporters will again play a home-and-away series with upstate powerhouse Wethersfield.  The Eagles travel to Loeffler Field on Friday, September 3.  On Saturday, September 11, the Wreckers participate in Wethersfield’s annual round-robin tournament — a fundraiser to honor Wethersfield and Staples players lost on that very date in 2001.

“We always enjoy playing (coach) Rob Jachym’s team,” Woog said.  “It’s a great early test of where we stand — and what we have to work on.”

A 4th pre-season date is still unscheduled.  Woog hopes to fill it with an FCIAC opponent that the Wreckers do not meet in the regular season.  The league schedule has not yet been finalized.