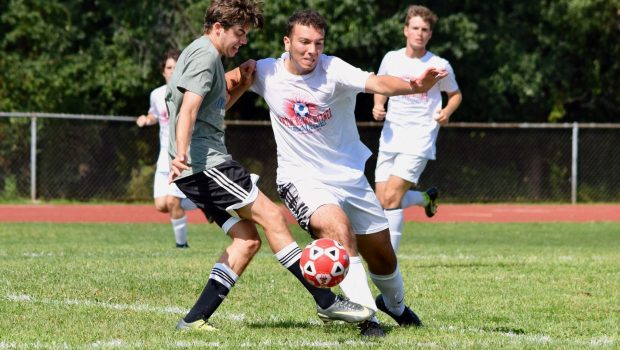 For 16 years, the Winton, Keane, Bittner Memorial Tournament has been a highlight of Staples’ pre-season.

The Wreckers honor the memory of the 3 former Wethersfield High School soccer players killed on 9/11 — and of Staples’ own Scott Coleman, also lost on that tragic day.

When the moving ceremony is over, the focus switches to the present. Competition is solid, and the format of 3 matches, each 30 minutes, against a variety of opponents offers a great way to test lineups, combinations and tactics.

Staples opened with a weak performance against Kingswood Oxford. The prep school scored after a series of poor defensive decisions and touches. The Wreckers looked disorganized and uninspired all over the field.

The final match — versus frequent class M state champion Tolland — was the Westporters’ best of the day. They followed their game plan, played quickly and with purpose, and were rewarded with 2 goals. Perez Elorza tucked in a pass from Daniels; then Daniels finished off a nice feed from Josh DeDomenico. The Wreckers rested several players in that match, including the keeper. Nick DiMasi filled in ably in the nets. Wilson Daniels finishes his 2nd goal of the day, versus Tolland. (Photo/Armelle Daniels)