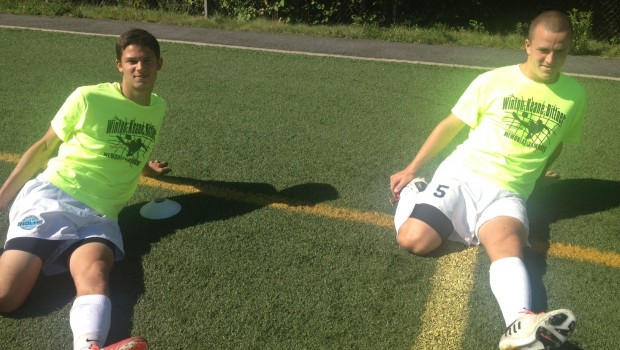 The blue-and-whites played the 1st 30-minute match on the turf, against host Wethersfield. The Eagles won 1-0, scoring on a quick transition. The Wreckers nearly got the equalizer in the final seconds, but Andrew Puchala’s header caromed off the crossbar.

An all-underclass team then topped Fermi High, 1-0. This time Puchala’s header was true, off a Joe Pravder corner kick.

The final match pitted 10 seniors and sophomore keeper Noah Schwaeber against Kingswood-Oxford. Staples dominated territorially, but settled for a 0-0 draw.

“We can’t wait for the season to get started. This is what our guys have been waiting for since last December.” He expects The Hill to be packed for Tuesday’s 4 p.m. opener against Danbury. Senior defenders and leaders George Kokkalis and Connor Weiler warm up prior to the 1st match at Wethersfield High School.