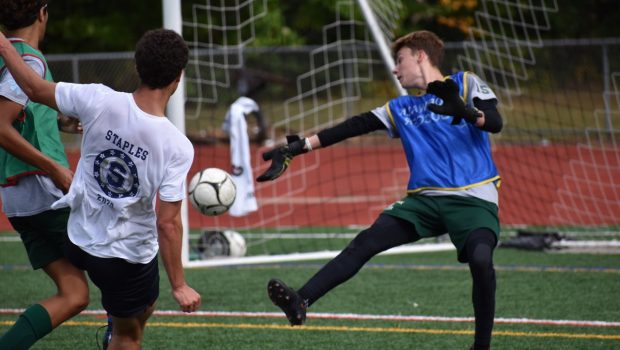 Wreckers Finally Back On The Field!

Most Staples players had not played a real, competitive outdoor match since last November.

Most Norwalk players had not either.

Today’s scrimmage at Testa Field marked a welcome return for both squads. After club seasons were canceled last spring; after a summer spent waiting for a decision on the fall season; after 3 weeks of conditioning and skillwork in groups of 10, and — finally — after teams were permitted to have “contact” during training 5 days ago, the uncertainty finally ended.

Today’s scrimmage was — predictably — fast-paced and a bit ragged. The Wreckers scored first, off Alan Fiore’s feed to Haydn Siroka. The Bears equalized on a penalty kick.

They took the lead in the 2nd half on a counterattack, but sophomore Ben Douglas drew his team level with a header, off classmate Hunter Smith’s long throw.

Norwalk tacked on 2 late goals, to snag the victory.

“Everyone was so thrilled to be back on the field,” said Staples head coach Dan Woog. “It’s been way, way too long. We are grateful for the chance to play, and look forward to whatever lies ahead. As always, this is the best time of the year.”

The Wreckers are in action again Tuesday. They scrimmage at Brien McMahon (5:30 p.m.). The regular season starts Friday, October 2, with a home game against Danbury. Spectators are not allowed. Click here for the livestream. The first pre-game huddle of the year. (Photo/Drew Douglas)