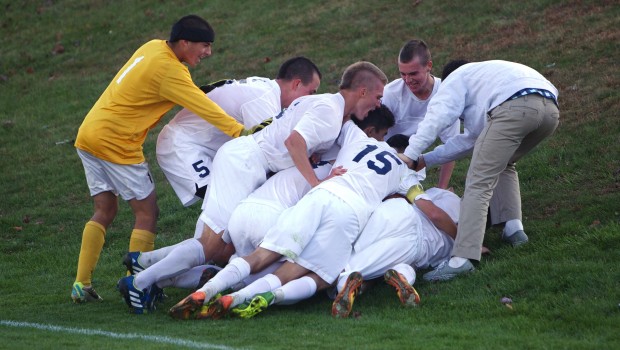 Staples’ 2014 FCIAC schedule is set. So is their toughest pre-season ever.

The Wreckers are on the road for key matches with Danbury, Ridgefield, Norwalk, Fairfield Ludlowe and Trumbull. They’re home against Westhill and Greenwich. The regular season ends Wednesday, October 22 (home vs. Harding). Playoffs begin 2 days later.

“We have to hit the ground running,” said head coach Dan Woog. “We have to be fit and focused — mentally as well as physically — the moment tryouts begin. Our players want to test themselves against the best, and we’ve designed an amazing pre-season for that reason.

“We have no time to waste. The guys who get with the program over the summer will be ready. The ones who don’t should find another activity. The ones who do will help take us to another level. Their hard work will pay off. I can’t wait to get started.” The state tournament is a ways away. But the start of pre-season is just around the corner. (Photo/Kim Lake)