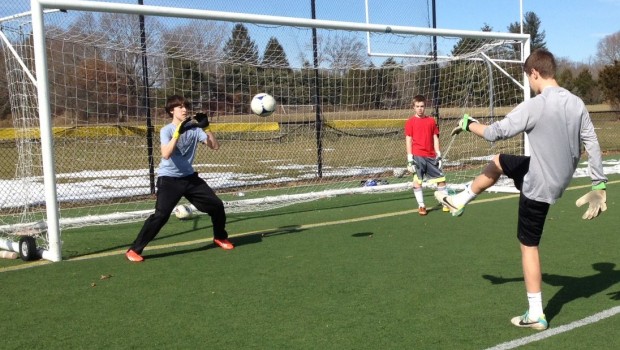 For the 6th year in a row, Staples varsity and middle school soccer players enjoyed a special mentorship program.

Snow knocked out the 1st of 3 planned weeks, but on 6 of the following days nearly every returning Wrecker varsity player designed 1 or 2 special afternoon sessions at Wakeman for younger premier and WSA travel players. At the end of each session the mentors and mentees spent time talking with the younger players about Staples, soccer, and life in general.

Over 50 younger players participated. Goalkeepers had their own individual groups.

Feedback was extremely positive.  Parents cited the Staples players as role models, who inspired the younger players both as athletes and people.

The mentors, meanwhile, mentioned how much fun they had working with the future Staples stars. Several volunteered to run extra sessions.

The Wreckers also were impressed with the middle schoolers’ high level of technical skill, and tremendous enthusiasm.

Head coach Dan Woog said, “This program incorporates 2 core values of the Staples soccer program: giving back to the community, and connecting Westport’s soccer generations.” He noted that several mentors were once mentees, in the program.

Woog cited the benefits of the program for all participants. “The middle school kids were there every day, working hard and having a great time. And the Staples players not only had fun, but they learned what it’s like to plan and run training — and have to change plans on the fly.” Tri-captains Patrick Beusse and Michael Reid end their mentor session with a chat.