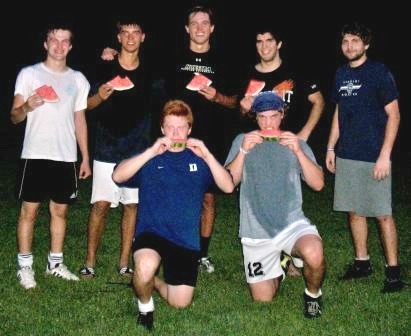 The most competitive, best-played Watermelon Cup league in history ended the same way every other one has:  with USA on top.  The squad — with the 2006 team at its core — has won the league every year they’ve played together.

This year, though, it wasn’t easy.  Trinidad and Tobago rallied from a 2-0 deficit, forcing golden-goal overtime.  Five minutes were scoreless; then, each team had to remove a player every 90 seconds.  It got down to 3-v-3, when Nicky Hoberman netted the game-winner.

USA reached the finals with a hard-earned 3-2 victory over Costa Rica, while Trinidad and Tobago knocked out Mexico 5-0.  But Mexico — the rising sophomore-laden side — avenged that loss, with a 3-0 victory in the consolation match.

Thanks to all 6 teams that participated this year — and congratulations to the winning USA squad:  Greg Bachman, Brad Green, Nicky Hoberman, David Hoffman, Ryan Moran, Frankie Rende, Brian Wolgast and Craig Wolgast.  Also on the team, but unavailable for the finals, were Brendon Cristobal, Keaton Cristobal and Ben King.