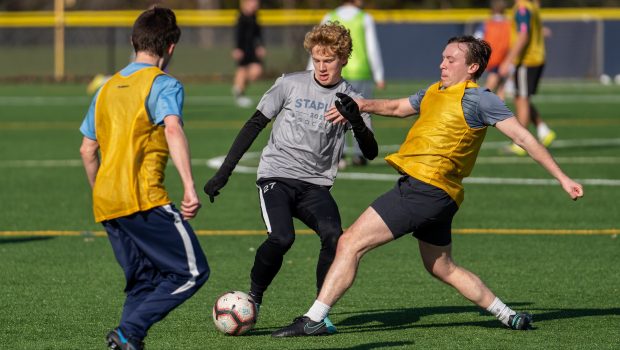 Over 60 current and former Staples players — and relatives and friends — worked up an appetite Thanksgiving morning, at the annual Turkey Bowl. Senior Jack Foster and Grayle Howlett. Grayle played for Greenwich High School in the 1970s, and then Middlebury College. But he’s been an avid Staples soccer fan — and faithful Turkey Bowl participant — ever since. Junior Alex Laskin and Matthew Engler ’17 contest for the ball. Engler just completed his fall season at Emory University — as did Josh Berman ’16 (#15) at left. Looking on is sophomore Dylan Hoke. Chris Meinke, ’04 tri-captain. Chris had a stellar career at Connecticut College. He has moved back to Westport, and saw several matches this year.