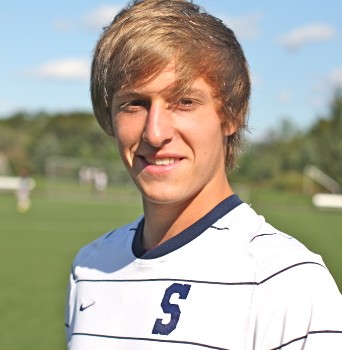 The event — at the Norwalk Inn — included speeches by coaches and captains, a video, introductions of all players, and several awards.

“It’s always a joy to look back on the season, and celebrate together,” noted head coach Dan Woog. “The year is still fresh in everyone’s minds, but already we’ve been able to get some perspective on our accomplishments. It’s a nice, positive evening, spent with the most important people in our program — each other.”

In a vote by teammates, Taylor earned the Most Valuable Player award. Woog said:

At our final meeting, I gave players the criteria:  The MVP is the person who, if he was not on the field this year, would have made the biggest difference in what we achieved.

Taylor was, quite simply, the rock of our defense.  He patrolled the back with skill, speed and strength.  He was powerful in the air, tenacious on the ground, and smart everywhere.  His presence helped allow our defense to play higher than maybe any team in the state.

We benefited from having an excellent goalkeeper, and great defenders around  him – they made several game-saving clearances – but it was Taylor’s skillful, solid presence that kept us in game after game.  And it was his tremendous spirit that kept our defenders together, and our entire team tight.  Taylor’s teammates have chosen well.

We have several worthy candidates. Among them, Alex had a difficult junior year.  He didn’t play a lot, and felt frustrated. We knew Alex was a good player – but we wondered what would happen this fall.

We needn’t have worried.  Alex accepted – in fact, embraced – our request that he play defense, to take advantage of his attacking ability. He seldom came off the field – and when he did, it was for instructions about what we wanted when we put him back on at midfield, or even up top.

Most importantly, Alex did it all with a smile.  Most Improved often goes to a player whose skills get so much better from one year to the next.  Alex was always a talented player.  So the “improvement” really comes from that attitude – which helped our entire team improve.

The Alumni Award — given to a player who “best exemplifies the values that have been the foundation of the Staples boys soccer program since its inception” — went to co-captain Jake Malowitz. Woog explained:

He loved being part of our program – and went so far as to say that playing Staples soccer was “an honor.” And, as any alumni could see, he continued our 53-year tradition of smart, take-no-prisoners defense.  Jake represents all the best values and ideals that our alumni appreciate and love.

The Jeff Lea Award — presented to adults for “long, enthusiastic and meritorious service to the Staples boys soccer program” — was given to Dan Donovan ’81 and Mark Noonan ’82, a pair of former teammates who, ever since graduation, have supported Staples soccer. Woog said:

Dan went on to a very successful career in healthcare; he sold his company, and retired last year. Mark was assistant commissioner of MLS, among many other things, and now has his own sports marketing firm. But both Dan and Mark find time – they make time – to stay committed to Staples soccer – and they’ve done so ever since graduating from college.

They serve as evaluators at tryouts.  They serve as mentors to our captains.  They are key members of the Top of the Hill Team booster club.

But they also play a valuable role way behind the scenes. Each January I meet with a group of alums; we talk about where the program is going, what we need to do – and, very importantly, what I’m doing wrong. Their advice is honest, on target, and very creative. They never hesitate to criticize, and suggest improvements – but they do it out of a tremendous love for our program, and for everyone associated with it. I hope they continue to do so for years to come.

The final announcement was of co-captains for the 2012 team. James Hickok was re-elected. He will be joined by Joe Greenwald, who becomes part of the 1st father-son captaincy in Staples history. Joe’s father Tom captained the 1978 team to a state championship.

One other award was presented by Chris O’Dell. Jordan McNair earned the Stephen Martin Award, presented annually to a freshman player who “best epitomizes Steve’s special spirit, by combining the desire to excel with the willingness to work and the eagerness to share.”