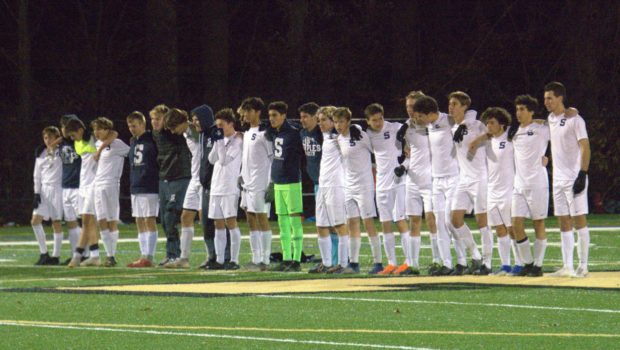 Just 48 hours after stunning the state with a a historic, electrifying win — down 2-0 after 14 minutes, still trailing 2-1 with 7 minutes remaining, Staples roared back to stun #1-seeded, 2-time defending state champion Glastonbury 3-2 — the Wreckers had to play again.

It can be hard to come back down to earth after such a remarkable match. Fortunately, the Westporters faced Trumbull.

The teams are longtime rivals. The Eagles have recently had the upper hand. Last fall, they knocked Staples out of the FCIAC finals on penalty kicks. This year the Wreckers rallied from a 2-0 deficit to tie in the regular season, 2-2; more recently, Trumbull pulled away in this year’s FCIAC semis to win 4-1.

Trumbull went on to take the FCIAC title, for the 2nd straight time. Seeded 8th in the state “LL” (extra large schools) state tournament, and with 10 seniors in the starting lineup, they cruised through the first two rounds: 3-0 over Amity-Woodbridge, 6-1 against Shelton.

The #17 Wreckers, meanwhile, had a tougher time. Before Glastonbury, they won 3-0 versus Wilbur Cross — despite playing the final 41 minutes a man down.

There was no letdown today, in front of a massive crowd at the Eagles’ field. In fact, it was a classic match — worthy of a state final, perhaps.

Based on the previous match against Trumbull, Staples tweaked their game plan. The adjustments worked. Defenders Carter Bassler, Benny Feuer, Brendan Lynch and Surya Balaji did not play quite as high a line. They dropped more quickly than before. Except for a couple of forays, that effectively kept the direct-playing Eagles further from goal than they liked. Bassler and Feuer — two seniors who played with the reserves last year — have come on strongly all year. Today they attacked dangerously, out of the back.

Their best chance of the first half came in the 27th minute. A shot rocketed off the cross bar, landing directly in front of a shooter. Keeper Sebi Montoulieu saved, from point-blank range.

Patricio Perez Elorza directed midfield, winning balls and roaring forward. Murilo Moreno backed him up nicely. Alan Fiore manned the left side, while Sam Liles used his speed and wiles to get behind the defense on the right.

Up top, Emerson Anvari and Lars Djuve alternated in holding the ball, allowing teammates to get forward. George Smith slipped through several times up top too.

Evan Birns — bothered by a hamstring injury — sat out the first half. When he came on after intermission, he added a jolt to the lineup.

In the 51st minute, the Wreckers called for a foul in front of the Trumbull bench. But the official waved the play on. The Eagles roared forward, switching the play diagonally from right to left. A cross from the far side was headed strongly over the keeper’s head. The hosts were suddenly on top; their fans roared.

With 29 minutes to go, Staples felt confident. They’d been in this position before — 2 days earlier at Glastonbury, and 2 months earlier on this same field. Bassler rattled a shot inches high. The backs calmly worked the ball ahead; the midfielders spread the play wide, and the forward attacked with numbers.

Still, the clock ticked down. The Wreckers were going for the equalizer, playing great team soccer and showing tremendous grit, but the 80th minute was approaching.

Then Feuer delivered a cross. Perez Elorza, took a couple of touches, and delivered into the box. Smith tried for it — but Birns finished, with a spectacular diving header.

Once again, Staples had battled from behind — and scored almost at the end. Just 5:58 remained in regulation time.

Trumbull came right back, forcing Montoulieu into a save.

The evenly-matched game headed to overtime. Tournament rules mandate 2 10-minute periods, to completion. There is no golden goal.

There was no goal, in fact. After 20 minutes of intense, back-and-forth play, the rivals headed to penalty kicks.

At Trumbull, Staples shot first. Balaji’s effort was true. So was Trumbull’s.

Smith and Liles also converted — but so did the Eagles.

Feuer had to make his penalty, to keep Staples alive. Calmly, he did.

Now it was up to Trumbull. A good kick would win it.

The Wreckers were devastated. They’d played their hearts out. They’d come from behind, as they so often had this year. They’d taken the FCIAC champions to the ultimate limit.

It was a bitter, gutting defeat. But in many ways, Staples won.

“I’ve said it before, at the ends of season when we’ve fallen just short: Soccer is a cruel game,” said head coach Dan Woog. “For what they did — for how they played, and what they accomplished — our guys deserved more. But only one team can go on, and Trumbull will represent the FCIAC wonderfully.

“I feel so badly for our guys. But to battle so intensely, and commit themselves so strongly to each other for so long, gives them a feeling they’ll never lose. At the beginning of the season, we challenged them to write their own chapter in the Staples soccer history book. And this is one of the greatest chapters ever.” FINAL SCORE: Trumbull 2, Staples 1 (penalty kicks, 5-4). FINAL SEASON RECORD: 11-6-4.

In other quarterfinal action, #5 Hall trounced #4 Naugatuck 5-0; #7 Farmington topped #2 Fairfield Warde 2-1, and #14 Greenwich edged #11 Hamden 2-1. The finals pit Trumbull against Hall, and Farmington against Greenwich. Those matches will be played Tuesday, at neutral sites….

In class “L” (large schools), Wilton advanced with a 5-1 victory against Joel Barlow. The Warriors meet Wethersfield in Tuesday’s semi. Surya Balaji and Sam Liles, ready for anything. (Photo/Christina Bassler) One Response to State Tournament Quarterfinal Report: Staples vs. Trumbull