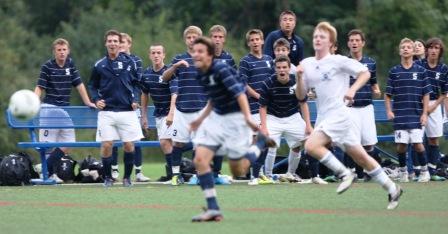 Comparative scores don’t always mean a lot, but when the Wreckers saw the results against common early-season opponent St. Joseph — Staples won 1-0, Wilton 4-0 — they knew they were in for a battle.

Action was end to end at Kristine Lilly Field.  The visitors had some good early chances — in particular keeper James Erario’s great stop on Max Hoberman — but the Warriors countered with their trademark flick-ons and direct balls.

Staples goalie James Hickok made 2 key saves midway through the 1st half.  Wilton had the run of play for 10 minutes after that, with the Westporters trying to maintain their distinctive shapes, both offensively and defensively.

In the 43rd minute Jake Malowitz’s rebound goal was called back, for offside.

Two minutes after that Dylan Evans raced forward, earning a free kick.  Steve Smith laced a long ball that Erario parried away at the last second.  He saved again, on the ensuing corner kick.

The Wreckers continued to press.  In the 50th minute Hickok launched a long outlet over the top.  Lorenz Esposito timed it perfectly, and fed Max Hoberman.  But the game remained 0-0.

Staples’ defense was tested, but did not bend.  Taylor McNair held down the middle; Malowitz and Tonsberg patrolled the flanks, while Ben Root and Harry Birch added height and power.

In the 68th minute Diego Alanis forced a corner kick.  There was nail-biting goalmouth action — but still no goal.

Then Smith corraled a ball near midfield.  He sent a pass forward, to the onrushing Malowitz.  The defender one-timed a ball from the right side across to the goalmouth.  Terence Gibbons timed his run perfectly — and side-volleyed home the 1st goal of the game.  Just 5:36 remained.

Wilton refused to die.  Almost immediately, McNair cleared a ball off the line.

The final 3 minutes were even crazier — and more intense.  But Malowitz and Hickok came up with huge saves.

Finally, the horn sounded.  Staples had an important, hard-earned, gut-it-out win.  It was their 2nd 1-0 victory in their 1st 3 matches.

The Wreckers will collect used soccer balls at Saturday’s 11 a.m. home match against Brien McMahon.  The “Kick for Nick” drive — for distribution by US soldiers to children in Iraq and Afghanistan — is being organized by Taylor McNair….

Nate Argosh scored 1st, in the freshman match against Fairfield Ludlowe, but the Falcons responded with 4 straight goals.  The Wreckers owned the 2nd half — and Argosh tallied twice more — but ultimately fell 4-3.  Argosh, Jordan McNair and Ellis Laifer all played excellently.

The Staples team is totally involved in the match. Here they cheer Diego Alanis, as he races forward in the waning minutes against Wilton. (Photo by Carl McNair)

Harry Birch gives it his all defensively, while keeper James Hickok sets up for a save. Helping out defensively are Taylor McNair (9) and Alex Tonsberg (16). (Photo by Carl McNair)

2 Responses to Staples vs. Wilton