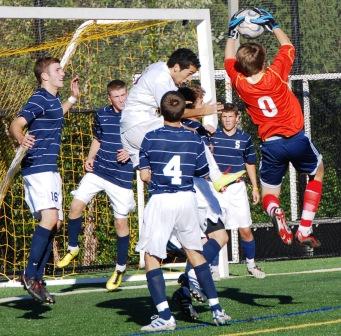 As traditional as FCIAC soccer is, there’s always something new.

Today’s tradition for Staples was the opponent:  a typically skillful, fast Westhill team.

What was new was playing on the turf near the front of the school.  For years the Vikings’ home field was a small, rocky patch intersected by a baseball diamond; more recently, the Wreckers met them on the football field.

Today’s turf was soft, quick, long but narrow.  The match started at a fast pace — and though Brendan Lesch had the initial shot, the hosts got the 1st goal, just 4:45 in.  It came off a series of Staples mistakes, and culminated when Christian Oliva fed Mateo Gallego for a far-post finish.

Mikey Scott then threatened — but so did Westhill.  Sean Gallagher cleared a dangerous ball.  At the other end, the Vikes’ tall keeper, Ian Huntoon, was steady and sure.

In the 13th minute Lorenz Esposito fed Gudis.  His well-timed cross sent Lesch through — and he calmly headed home for the equalizer.

Scott had a prime chance to put his side ahead, but shot high.  Westhill countered well; Staples defended equally strongly.  Defender Frankie Bergonzi got himself forward several times, while Gallagher, Jake Malowitz, Court Lake and Ben Root held the fort.

Wrecker keeper James Hickok earned his money.  He had 2 tough tip saves, and was well positioned on another shot that banged off the crossbar.

The half was even statistically — Staples had 7 shots, Westhill 6 — but the Vikings controlled the tempo.  And it was a very fast pace.

At halftime, the Wrecker coaches challenged their team to replace diving in with hard tackling.  In the 52nd minute Lorenz Esposito — the sophomore who has been playing well up top — almost put his side ahead.

Gudis, Scott, Jake Krosse, Max Hoberman — and, later, Lars Aanestad — had much more of a midfield presence in the 2nd half.  Harry Birch had a solid turn defensively.

Where the final 40 minutes last Friday against Norwalk was a tactical battle, today’s 2nd half was a bruising physical one.  The full-field action continued — though there were few telling shots — and though there is no dust on a turf field, if there had been it would not have settled until the final whistle blew.

The JVs have added a match to their schedule.  Next Saturday, at 3 p.m., they face Hamden Hall at the visitors’ Homecoming.  The private school’s coach, Tim Hunter ’71, was an All-American at the University of Connecticut.  He then played professionally in the North American Soccer League….

Frankie Bergonzi gets air, as he moves forward out of the back. Ben Root speeds back to cover. (Photo by Lisa Krosse)