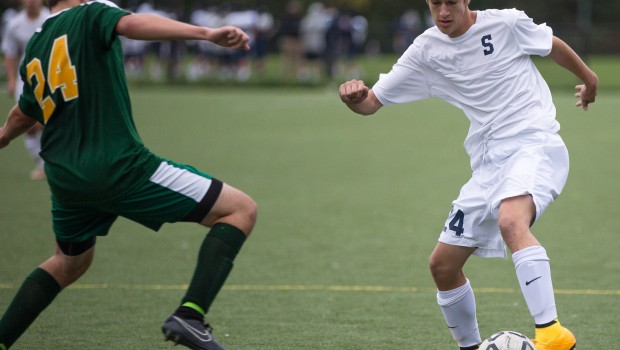 The Wreckers were scheduled to host the Crusaders today at Loeffler Field. But when the Staples girls team match with Wilton — perhaps their toughest opponent this year — was postponed due to the Yom Kippur holiday, and today was the best available option to reschedule, head coach Dan Woog offered up The Hill. The girls tied 1-1 this afternoon — and the boys played on the Wakeman turf. It was only their 3rd regular season match ever there, and the 1st not changed due to rain.

The Wreckers spread the field nicely, and found feet. But though they fired more than a dozen shots in the 1st half, nearly all were waist- or head-high, and grabbed by the keeper. That’s no surprise: He’s a basketball player.

The blue-and-whites substituted liberally in the 2nd half, and the shots continued to come. Midway through, Daniel Perez Elorza took a corner. The ball bounced for a while, before sophomore Jerrett Rende poked in his 1st varsity goal.

“This one’s in our rear view mirror already,” said Woog. “Now our entire focus is on Greenwich.” The Wreckers host the 8-2-1 Cardinals on Wednesday, at 4 p.m. — back at Loeffler Field. FINAL SCORE: Staples 2, Trinity Catholic 0. SEASON RECORD: 5-4-2.

QUICK KICKS: Yousef Shahin — currently starring as a freshman at Clark University — was at today’s match….

Trinity Catholic literally “parked the bus.” The driver somehow got on the asphalt track at Wakeman between the field and the parking lot — and stayed there the entire match….

The freshmen topped Trumbull 4-2. Tyler Wright followed up Will Birch’s 1st-minute shot off the crossbar; Matt Engler ripped from 18; Anton Mahr dribbed 4 defenders on a breakaway, and then Birch 1-timed a Mahr cross. Coach Chris O’Dell lauded Mahr and Engler for controlling the midfield, on the ground and in the air. Sebastian Wick is all concentration against the Crusaders. (Photo/Kim Lake) Sam Kantor has a great game on the left side against Trinity Catholic. (Photo/Kim Lake)