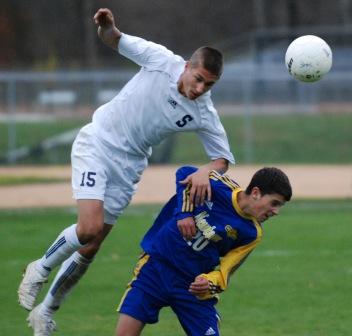 Staples vs. Newtown (State tournament Round of 16)

A midday drizzle made the ball slippery in the early going of this afternoon’s state “LL” match, but Staples was in control throughout the 1st half.

The Wreckers combined nicely, attacked well into the corners, earned corner kicks, and tried to keep the Nighthawks back on their heels.  One goal off a throw-in was negated by a foul, but in the 31st minute Matteo Marzoli launched a free kick to Brendan Lesch.  The junior midfielder sent Mike White through.  He finished authoritatively, slamming a shot into the back netting for a 1-0 lead.

Frankie Bergonzi, Sean Gallagher, Mikey Fitzgerald and Jack Hennessy kept the visitors at bay.  Michael McCarthy was forced to save a bullet in the 36th minute, but 2 minutes later a sweet series involving Lesch and Alan Reiter got the ball at Andrew McNair’s feet.  The quad-captain threw on a few fine moves, then laced a cross into the box.  Marzoli’s header was stunningly true.  It was his 1st goal of the year — and gave the Wreckers a solid 2-0 edge just before halftime.

At intermission the Wreckers talked about putting the Nighthawks away.  They tried to, but in the 53rd minute Adam Buccino halved the margin with a shot off a cross from Eric Thornberg in the far corner.

Lesch, McNair and Marzoli went back on the attack — yet Newtown was equally determined.  With 10 minutes left Hennessy cleared a ball off the line.

Three minutes later, Staples was not as fortunate.  A dumped ball caught them flatfooted, and Josh Engler converted.  The Nighthawks had battled back from a 2-goal deficit, and once again it was anyone’s game.

Staples headed to overtime — their 1st extra-time game since the 2006 final against Simsbury.  A new state rule eliminated golden-goal victories this year — but with a twist.  The 1st 10-minute overtime is played to completion.  If one team leads, it wins.  If the score is still tied, another 10 minute period is played — also to completion.  Only then are penalty kicks taken.

The overtime periods saw Staples back in control.  They generated chance after chance — several of the spectacular variety.  But keeper Zach Dlouhy was equal to the task.  Twenty minutes of OT ended, with the score 2-2.  Both teams headed to the center circle, for PKs.

In their 2006 run to the finals, Staples played — and won — PK games in both the quarterfinals and semis.  Each went to the 2nd round of 5 kickers.

As in those matches, the Wreckers kicked 1st.  As in those games, Staples’ keeper took a turn.

This time, McCarthy had the 1st attempt.  His hard shot was good.

White was saved well; Jeff Dinicola put his squad up by 1, after 2.

Marzoli nailed his try; when Newtown’s shot caromed off the post, the teams were again even.

Greg Gudis — kicker #4 — struck true.  McCarthy got a hand on Evan Kennedy’s blast, but could not redirect it.

Each team had 1 more attempt.

The final Nighthawk kicker approached the ball, shot — and saw it sail high over the bar.

It was a joyous celebration — and one the Staples squad took to heart.

“In the state tournament, anything can happen — and often does,” said head coach Dan Woog.  “Our job is to learn from every game we play — to take something from each tournament experience.  There are plenty of lessons to be gained from this one. ”  Final score:  Staples 3, Newtown 2 (PKs, 4-3).  Season record:  19-2.

QUICK KICKS: The quarterfinals will be played Saturday, at Amity-Woodbridge.  They tied Hamden 0-0; that match went to penalty kicks too, with Amity winning on PKs 4-1…

The Wreckers are 1-1 against Amity.  In 1993, Anson Ashby’s goal with 16 seconds remaining in the final overtime gave Staples a 1-0 victory in the quarterfinals — right after Amity had played a PK game.  The Wreckers went on to win the state championship — their most recent.  The following season, Amity eliminated Staples 2-0 — also in the quarterfinals….

Once again, defender Frankie Bergonzi gets air — this time over a Newtown attacker. (Photo by Lisa Krosse)

Mike White and a Newtown Nighthawk in an aerial battle. (Photo by Lisa Krosse)

40 Responses to Staples vs. Newtown (State tournament Round of 16)