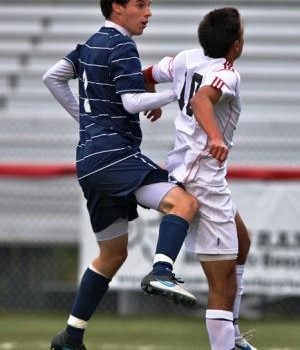 After Wednesday’s 3-0 thumping by Westhill, the  Wreckers faced a harsh reality:  They might not qualify for the FCIAC tournament.

Their task:  Get back on track at New Canaan.  The game had extra significance:  Staples (8-2-3) was in 4th place in the FCIAC standings.  Just 1 point behind them were the defending class L state champion Rams.  Their record:  7-1-5.  The lone loss was to Wilton.

As they arrived, the Westporters oohed and aahed at Dunning Stadium’s state-of-the-art scoreboard.

“Scoreboards don’t win games,” head coach Dan Woog reminded them.  “What’s important is that the ‘0’ stays for New Canaan, and we put at least 1 up there.”

The Wreckers knew that would not be easy.  But they went to work from the opening whistle.  Jake Malowitz sent Max Hoberman into the red zone.  David Hoffman’s shot off the corner kick was high — but the tone was set.

With Steve Smith playing his best game of the year at midfield — on both sides of the ball — and Hoberman and Dylan Evans supporting him, Hoffman and Lorenz Esposito pressed forward.

Hoberman’s shot was saved well by New Canaan’s excellent keeper, Scott Levene, but the feisty midfielder kept coming.  In the 16th minute he picked up a ball, and fed Hoffman.  He quickly found Esposito, who knocked another pass forward to Hoberman.

Hoberman outran his defender and ripped a shot that flew in, near post.

“That’s the 1st time we’ve ever scored off the 3-minute drill!” coach Kurt Dasbach said, referring to a Wrecker warm-up that demands strong service, laying off one-touch, and firing on goal.

Taylor McNair led the back line, with Malowitz and Alex Tonsberg stepping with him to win balls, initiate attacks, and deny space to the likes of Jon-Luke Ferrandino, the Ram captain and far-ranging central midfielder.

Behind them all, keeper James Hickok was his usual solid self.  He dominated the box on high balls; came out dynamically on low ones, and punted far beyond midfield to keep his team on the attack.

In the 49th minute Esposito sliced a great ball forward.  Hoffman’s shot was high, but the blue-and-whites were pressing well.

The Rams almost struck in the 70th minute.  But Hickok came out hard, presenting a huge target, and the shot flew wide.

Managing their lead, the Wreckers worked the ball into the corner.  New Canaan was not about to surrender, though, and with 5 minutes to play Malowitz made a clutch clearance off the goal line.

Hickok came up huge again; quickly, at the other end, Esposito ripped a shot that Levene saved for a corner kick.

It was another nail-biter for Staples.  But — for the 5th time this fall — they gutted out a 1-0 win.  It was their 8th shutout — huge props to the defense all over the field — and, Woog said, “our best and most consistent 80 minutes of soccer this year.”

The win secures them an FCIAC tournament berth — and a shot at their 4th straight league title.

It gives them confidence heading into another key match with Danbury on Monday.

It ruined the Rams’ homecoming.

QUICK KICKS:  The Rams led in shots 11-8, but Staples had 5 corner kicks to their hosts’ 2.  Hickok and Levene made 7 saves each….

The freshmen played excellently in a 2-0 shutout of Westhill.  Goals came from Ethan Kobak and Nate Argosh.  Jordan McNair once again stood out.