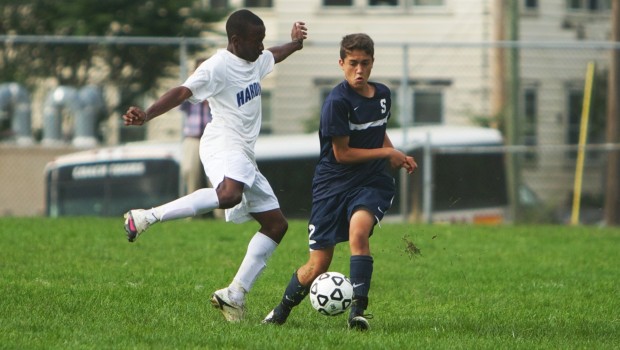 But they opened last week with a 1-0 win against Westhill. They’ve got an excellent attacker in Arturo Rocha; a smart sweeper in Ocasio Brown, and  a never-say-die attitude that could take them far.

Playing at Hedges Stadium — a narrow football field with high grass — is never easy. But — like the Harding program — it too is in better shape this year than in the past.

Staples took the field without Jack Scott. The co-captain suffered a concussion against New Canaan. Michael Reid went on at midfield, with Diego Alanis pushing up.

It was a different game than usual, from the start. The Presidents played with conviction, and though Staples had the territorial advantage, the Wreckers could not connect. Charlie Leonard slotted a ball across, but no one was there. Connor Weiler hit a shot high. Joe Pravder nearly scored. Nate Argosh shot high.

But the hosts drew first blood, in the 29th minute. Rocha finished a counter with a clinical strike into the far corner. It was the 1st goal Staples surrendered all year.

The blue-and-whites went back to work. Patrick Beusse shot; George Kokkalis followed, and they earned a corner. Steve Sobel’s throws created some pressure — and, less than a minute before halftime, the long throw worked. Michael Reid was in the right spot, heading down and in perfectly.

Two minutes after intermission, Staples scored again. This was a penalty kick by Yousef Shahin, after Beusse drove into the box and was fouled.

Puchala nearly connected off another Sobel throw, but the Presidents kept pressing too. Schwaeber made a great save in heavy traffic in the 55th minute.

Harding had a chance to go ahead in the 63rd minute, but the shot flew just high. Reid and Leonard nearly tallied for Staples; then Alanis hit one over the crossbar. There were several Staples opportunities in the 71st minute, as the Wreckers went for the win.

But with 2 minutes to play, the Bridgeporters caught Staples on a long counter. Once again it was Rocha with the ball; once again he finished cleanly.

Harding celebrated as if they’d won the World Cup — or at least FCIACs. After 21 years of near-futility, they certainly had the right to. FINAL SCORE: Harding 3, Staples 2. Season record: 2-1-0.

Game photos will be posted later tonight or early tomorrow. Gabe Pensak works his way out of the back. (Photo/Kim Lake)