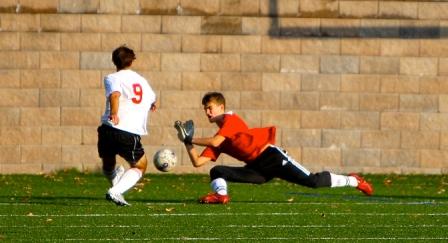 For the 2nd straight match, the Wreckers faced a foe with only 1 loss — away.

This time the hosts were 8-1-2 Greenwich.  Looking to avenge last fall’s 3-1 loss in the FCIAC final, the Cardinals came out blazing.  With a harsh sun directly in his eyes, keeper Michael McCarthy had the most active half of his varsity career.  He made 6 saves — many of the extremely difficult variety — and helped his team absorb strong Greenwich pressure.

Though the Cards had the run of the play, Staples led at halftime.  In the 24th minute Matteo Marzoli launched a seeing-eye 50-yard free kick.  Brendan Lesch maneuvered himself perfectly in the box, then back-headed the ball into the net.

Alan Reiter entered the match in the 2nd half, and the complexion of the game quickly changed.  (Not playing into the sun also helped.)  In the 42nd minute Lesch had an excellent opportunity; 2 minutes later Jake Krosse’s cross created a goal that was negated by an offside call.

The Westporters kept pounding, and in the 54th minute their pressure was rewarded.  Marzoli found Mike White; the forward deked and juked in the corner, then slotted a ball across for a 2-0 lead.

Greenwich’s best chance of the 2nd half was spectacularly — quasi-miraculously — cleared off the line by sweeper Jack Hennessy.  Drew McNair countered, and nearly scored immediately after.

Two minutes before time, Greg Gudis’s nifty work set up a shot by White.  The keeper could not hold on, and Reiter slammed the rebound into the back of the net.

“Once again, we got a good result against a quality opponent,” said head coach Dan Woog.  “Every game, someone else  steps up.  Today it was Michael (McCarthy).  He was clearly the man of the match, when we needed it.”

The freshmen went up 1-0, saw Greenwich equalize, then pulled away for a 3-1 victory, in their last match of the year.  James Manning, Noah Bender and Zach Morrison all scored.  Shining for the frosh were Zack Pensak and Harry Birch.  Congratulations to Coach Chris O’Dell and all the freshmen on an undefeated, 11-0 season!

Luke Yeager chases down a loose ball in Greenwich. (Photo by Carl McNair)

8 Responses to Staples vs. Greenwich