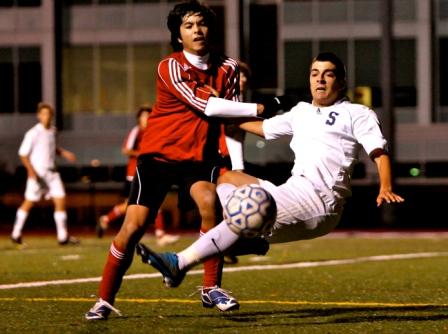 For years, Staples-Greenwich soccer matches have been hotly contested — and the rivalry has been particularly intense in the post-season.  Last fall the Wreckers roared back from a 1-0 halftime deficit to take the FCIAC final 3-1; 3 years ago they eliminated the Cardinals on Ben King’s header with 50 seconds remaining in the 2nd overtime.

That semifinal — and tonight’s — were played at Fairfield Ludlowe High.  The crowd grew as the night wore  on — and they got their money’s worth.

Greenwich showed Kenny Doublette on the left side — not the right, as before — but as before, Frankie Bergonzi was there to prevent him from penetrating.

Sean Gallagher patrolled the left side of the defense; behind them Jack Hennessy was his usual stalwart self, vacuuming up loose balls, initiating attacks, and extending his legs in physically inconceivable positions to stop anyone and anything that threatened.

Mikey Fitzgerald headed well defensively, and went forward with abandon.  In front of the defense Alan Reiter and Brendan Lesch were midfield maestros.  Drew McNair had one of his best games as a Stapleite, controlling play on the right flank.  He was mirrored on the left by Mikey Scott, who also shone on both sides of the ball.

Mike White and Greg Gudis were threats up top.  Matteo Marzoli came on to give the Westporters some potent, pin-point passing, while tracking back hard defensively.

And in back, of course, was Michael McCarthy.  The goalkeeper saw 12 shots — several of them difficult ones, and/or in traffic — and came up big on all of them.

The game began at a torrid pace, and continued that way to the end.  Staples’ best chances in the 1st half were a Fitzgerald header from McNair; some nifty moves by Reiter in the box; clever work between Lesch and White, and another Fitzgerald header off a free kick that keeper Sebastian Camacho snagged.

Staples continued to press — but Greenwich continued to look dangerous on the counter.  In the 57th minute Marzoli, Reiter and Lesch combined on the best opportunity yet — and were denied.

Five minutes later Scott — Staples’ throw-in expert — took an uncharacteristic short throw.  The Cards were surprised.  McNair corraled it, and played it quickly back to Scott.  He drove forward, beat his defender and crossed it into the box.

Greenwich did not step up together, so Fitzgerald was onside.  His newly-faux-hawked hair caught the ball perfectly.  His header was true — and the Wreckers’ celebration was so wild, the coaches worried they’d be carded for leaving the field.

Staples was not through.  In the 62nd minute, Camacho made a spectacular kick save on a breakaway by Scott.  With 10 minutes left White wheeled and dealed, before slamming a shot off the post.

Greenwich was far from dead.  But with Steve Denowitz adding a bit of extra defense, the Wreckers were equal to the task.  They managed the game well, and were rewarded with a tremendous ovation by the now-large and boisterous crowd when the final whistle blew.  Final score:  Staples 1, Greenwich 0.  Season record:  16-2.

QUICK KICKS: The Wreckers shoot for their 26th FCIAC title in 51 years Wednesday night at Norwalk (7 p.m.).  They face #2 Ridgefield, 3-0 victors over Central in the other semfinal…

This marks Staples’ 3rd FCIAC final appearance in 4 years.  They tied Trumbull in 2006, and won the crown outright last year….

Matteo Marzoli goes all out in the FCIAC semifinal. (Photo by Lisa Krosse)

Mikey Fitzgerald's header heads to goal against Greenwich — the only score of the game. (Photo by Carl McNair)

Sean Gallagher leads the Wreckers in a salute to their fans, after the semifinal win. (Photo by Carl McNair)

It seemed as if sweeper Jack Hennessy was everywhere tonight against Greenwich — and photographer Carl McNair proves it.