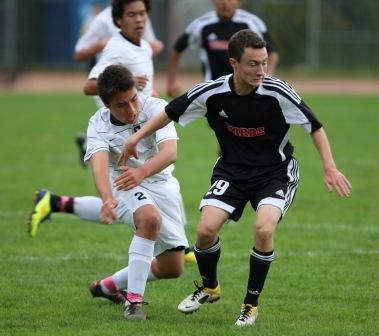 Staples never lost again to Warde; the record was 33-1-0.  Andrew Warde is now Fairfield Warde; last year the Mustangs gave the Wreckers a great battle in the FCIAC finals, before the Westporters prevailed 2-1.

Fairfield Warde came to Loeffler Field today with a 6-3-1 record.  They showed a 6-man defense, and throughout the 1st half it worked well.  Dylan Hoy earned an early corner kick; Dylan Evans worked the left side well, but the Wreckers needed a bit more penetration and creativity in the final 3rd — certainly in the box.

Long balls — including 35-yard shots — were not going to work.

Max Hoberman owned the right side, and ripped several great balls across from deep in the corner.

The final 5 minutes were reminiscent of last year’s FCIAC championship — in reverse.  This time Staples had Warde under the gun.

But just as the Wreckers repelled last year’s frantic forays, the Mustangs did the same. today  The crowd on the hill saw an exciting finish — but no goals.  Final score:  Staples 0, Fairfield Warde 0.  Season record:  7-1-3.

Aaron Liu and Ben Scheller battle for a ball. (Photo by Carl McNair)

Ben Root gets inside, on his way upfield. (Photo by Carl McNair)

A small portion of the large Alumni Day crowd, during halftime. (Photo by Carl McNair)