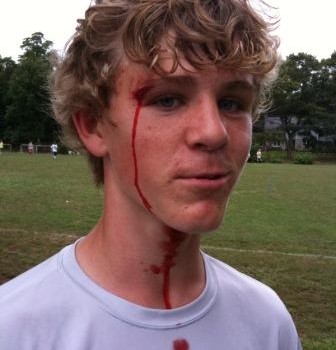 With an excellent keeper (Will Steiner), an experienced group of returnees (including Tim Frassetto, son of Don Frassetto ’77), and 7-1 transfer (from Trinity Catholic) Paschal Chukwu, Fairfield Prep is a legitimate state champion contender.

Today’s pre-season scrimmage — against a Staples team with its own excellent keeper (James Hickok), less-experienced but highly motivated players (including Joe Greenwald, son of Tom Greenwald ’79) and its own title hopes — lived up to its hype.

In a very physical, well-played, fast-paced and tactically intriguing match, the Jesuits got the only goal. It came in the 2nd half, off a long free kick across the middle to a free man on the back post.

But the Wreckers had their chances. Joe Greenwald banged a shot off the crossbar in the 1st half; Greg Shikowitz did the same in the 2nd.

Harry Birch was a solid force, and Staples got into the box well. Defensively, the blue-and-whites worked together well, with Ethan Bradeen and Andrew Puchala patrolling the middle. Jack Scott and Jordan McNair bookended midfield.

“This is exactly what we needed,” said head coach Dan Woog. “We love playing matches like this. It’s one of the best tests we’ve ever had in pre-season. We took a big step today — but there are many more steps ahead on this year’s journey.”

Harry Birch — shown here as a sophomore — had a very strong game at midfield.

One Response to Staples vs. Fairfield Prep (Pre-Season Scrimmage)