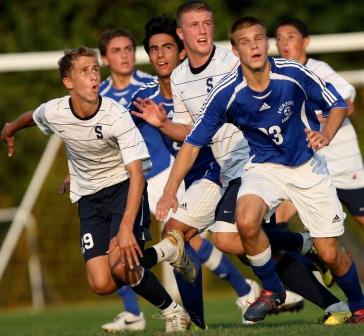 Today was gut-check time for the Wreckers.

Sporting an uncharacteristic 1-2 record, they faced added adversity.  Two starters were out:  defender Steven Denowitz and forward Greg Gudis.  Both players were missed.

But Sean Gallagher returned for the 1st time this year.  A hip injury sidelined him for several weeks, but his voice, speed and touch energized both his team and the large Loeffler Field crowd.

Frankie Bergonzi was similarly impactful attacking from the back, while Jake Malowitz held down the other side.

Brendan Lesch slid back a bit from midfield, but ranged far and wide.  He commanded much of the field — and the air — and his spark was noticeable from the opening whistle too.

Court Lake and Jake Krosse were important 2-way players on the flanks.  Up front Mikey Scott, Steve Smith and Max Hoberman took men on with confidence.

Staples’ pressure paid off in the 8th minute.  Hoberman’s free kick bounced around.  Two Wreckers knocked into each other, but Lesch picked up the loose ball and fired, netting his 1st goal of the season.

His 2nd came less than 10 minutes later.  Krosse laced one of his many dangerous corner kicks — the Westporters had 11 on the day, to the Falcons’ 0 — and Lesch power-headed it home.

Krosse continued to set up teammates.  Bergonzi headed just over the top, while another corner slammed off the crossbar.

The blue-and-whites continued to control the tempo and tactics in the 2nd half.  A nice combination between Smith, Krosse, Lesch and Malowitz nearly paid off.

The next foray, in the 54th minute, did pay off.  Bergonzi earned a corner kick, which Krosse took.  Hoberman played it forward into a goal-mouth scrum, and Bergonzi finished.  It was the defender’s 2nd goal of the year — and of his Staples career.

22 players saw action.  Lorenz Esposito excited the crowd with several good jaunts up top.  Will Meinke handled midfield with aplomb, while Taylor McNair looked solid on the left side.

“It was great to see our guys smiling again,” said head coach Dan Woog.  “They enjoyed the action; they enjoyed their teammates — they had a great time.  That’s what it’s all about.”  Final score:  Staples 3, Fairfield Ludlowe 0.  Season record:  2-2-0.

The junior varsity dropped their 1st match of the year, 2-1 to Fairfield Ludlowe.  Aaron Liu’s 1st-half goal off Jay Kaplan’s corner kick was negated by 2 in the 2nd half from the Falcons.  Walker Marsh showed well for Staples…

Lorenz Esposito, Brendan Lesch and Court Lake follow the ball — as do a trio of Fairfield Ludlowe Falcons. (Photo by Carl McNair)

One Response to Staples vs. Fairfield Ludlowe