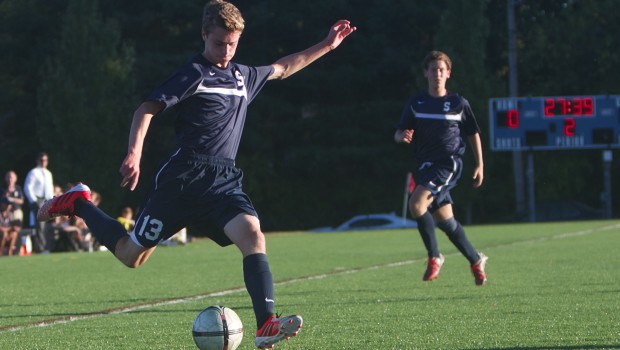 The Wreckers lost more than the game Saturday in Greenwich. They also lost rapidly improving keeper Noah Schwaeber to a concussion, on a goalmouth collision.

And today at Darien Staples was missing Andrew Puchala; he aggravated a muscle pull in Greenwich. Puchala is a vocal and very tough center back — and, thanks to his tenacity on set pieces, the team’s leading scorer.

But the Wreckers have overcome all their injuries — and much more — this year. They inserted Brenden Price, the very capable backup, in goal. They moved George Kokkalis into central defense, and dropped Charlie Leonard — a versatile, hard-running forward/midfielder — as a flank defender. Andreas Bru got the call up top.

Though the changes worked fine, the 1st half was poorly played. Staples seldom strung passes together; they forced the middle, and lacked creativity, purpose and passion.

Still, they led 1-0. The goal came in the 31st minute. Joe Pravder worked the outside craftily, then hit Leonard — who’d been moved forward, in hopes of a spark — who drilled his shot.

The 2nd half told a very different tale. Michael Reid opened with a blast. Yousef Shahin — now playing in back, for his distributive skills — almost nailed a corner kick. Just 4 minutes after intermission, Patrick Beusse and Pravder worked the ball to Leonard. He slotted it home, for his 2nd goal.

In the 63rd minute Nate Argosh’s rocket was bobbled. Daniel Perez Elorza alertly followed up. Only a spectacular save by keeper Liam Rischmann kept the score 2-0.

Meanwhile, Foster Goldberg — finally back after his own long rehabilitation from a knee injury — was playing extremely well on the right side.

But Kokkalis was knocked in the head. He had to be checked out by a trainer — but the trainer had to be summoned by walkie-talkie. For 10 long minutes, the central defender sat on the bench.

With 15:35 to play, the Blue Wave sniped a goal back. Still, the match looked like a Westport lock.

Suddenly — just 4 minutes later — it wasn’t. Darien knotted the score, on a rebound after a nice Price save.

Now things really got hot. The action flowed up and down the field. Argosh was saved; Darien came right back.

Time ticked by quickly. With a minute to go, Reid headed in the go-ahead goal — but it was ruled offside.

The Wavers attacked. They too were offside. Just 20 seconds remained.

Price raced 20 yards beyond the box to take the kick. It sailed upfield. A defender tried to clear with his head, and couldn’t. The ball landed at Pravder’s feet. The sophomore took one touch, then found Beusse on the right side a couple of yards inside the box.

The junior settled the ball. He looked at the keeper. Then he blasted a shot, near post. It flew past Rischmann, smacking against the back netting.

“This was a huge win,” said head coach Dan Woog. “It wasn’t the closest Staples ever scored to the end — the 1978 team won the state championship with 11 seconds to play in the 4th and final overtime — but it was very satisfying, and extremely important.

“Our guys learned some very good lessons today. They learned about our depth. They learned they’ve got plenty of heart. And they learned that if they keep fighting to the end, they can make things happen. I’m happy for them, and proud of them.” FINAL SCORE: Staples 3, Darien 2. SEASON RECORD: 9-2-2.

QUICK KICKS:  The junior varsity tied 0-0, on a very small field. They dominated and had several opportunities, but did not finish. The defense played very tough. Spencer Daniels and Jerrett Rende again played up from the freshmen…

One of the Blue Wave’s varsity starters is named Sean Gallagher. He is not the Staples Class of 2011 defender, now at the US Naval Academy.