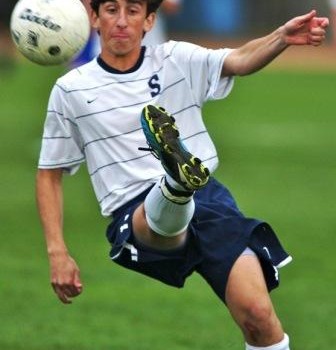 The Danbury Hatters came to Loeffler Field locked in a 5-way fight for one of the last 4 spots in the FCIAC tournament.  Their unusual record — 6-2-6 — indicated they play everyone tough; the opponents they’ve tied (New Canaan 1-1, Darien 3-3, Westhill 1-1, Trumbull 2-2) prove it.

The Wreckers were fighting too :  for as high a seed as possible in the league tourney, and a quarterfinal home match.

Coming off a big 1-0 win over New Canaan, they started out strongly.  With  defenders Jake Malowitz, Taylor McNair and Alex Tonsberg stepping up, and David Hoffman and Joe Greenwald penetrating fiercely in the box, they applied plenty of pressure.  Their slashing runs were some of the most creative of the year.

Steve Smith ran the midfield, backed up by Harry Birch and Ben Root.  Keeper James Hickok had little to do in his box.

The strong team effort continued in the 2nd half.  Dylan Evans and Max Hoberman worked the flanks, and in the 48th minute it all paid off.  Dylan Hoy and Esposito worked a give-and-go.  Esposito penetrated the box, then laid off to his fellow junior for a simple but quite effective tap-in goal.

Hoberman’s shot off the post 30 seconds later nearly made it 2-0.  So did Hoy’s flick-on to Hoberman — and Hickok’s long punt, which sprung Evans forward.

Hickok saved well on a rare Danbury breakaway.  Then, seconds later — in the 66th minute — Jay Kaplan kept a ball in on the left side.  He sent Greenwald through with a bouncing pass.  It was tough to handle — but the junior played it perfectly.  He ripped a shot from just inside the box, and the Wreckers suddenly led 2-0.

But — as has happened a few times this season — they let their foes back in the game.  The Hatters halved the deficit 43 seconds later.

The hosts threatened several more times — once on hard work by Greenwald, then from Esposito, and later Hoberman from Esposito — but with less than 5 minutes to play Danbury had a long throw from near the end line.

It sailed through the box — and was knocked in from close range.

“I’m disappointed — not in our guys, but for our guys,” said head coach Dan Woog following Staples’ 4th draw of the season (and Danbury’s 7th).

“For 70 minutes, we played excellent soccer.  This is a mental game, as well as a physical one.  We’ll keep working on the mental aspect.

The game was broadcast on the Staples Television Network…

The freshman team huddles just like the varsity. You can tell it's halftime — and Wakeman E — by the filthy uniforms. (Photo by Carl McNair)

2 Responses to Staples vs. Danbury