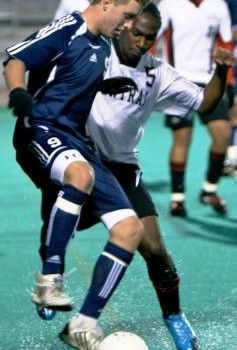 Central received good news earlier today:  Westhill forfeited 2 games (ineligible player), and 1 was to the Hilltoppers.  That raised the Bridgeporters’ record to 9-2-3.

More good news came for both squads just before tonight’s match.  The day-long rains ended, and though the Kennedy Stadium surface was far from ideal — the soggy yet slick surface caused balls to skip and players to slide — it was not the enormous puddle it had been during this afternoon’s JV game.

Central celebrated their seniors just prior to the match (and added a very classy moment of silence for Staples’ Preston Hirten too).

Just 3:28 into the game, 1 of those seniors — all-stater Reco McLaren — raced through the defense and finished strongly.  As against Brookfield, the Wreckers were in an early hole.

But the Hilltoppers were dangerous too.  Michael McCarthy came up with a great save in the 14th minute.

And then, just before halftime — just like in Brookfield — the home side scored again.  It was McLaren again, lacing a shot that skipped through.

Down 2-0, the Wreckers tried gamely to recover.  But Central’s defense hung tough.  And when the final horn sounded — signaling the end of both the game and the FCIAC regular season — it was a night for all the Hilltoppers to celebrate.

Meanwhile, Staples gets ready for the FCIAC tournament.  The quarterfinals Friday pit the #1 seeded Wreckers against #8 Westhill.  Despite their forfeits, the Vikings snuck in on the final day, thanks to a 4-1 victory over Fairfield Ludlowe.  Final score:  Central 2, Staples 0.  FCIAC final record:  14-1-0.  Overall:  14-2-0.

QUICK KICKS: Despite the loss, Staples’ record was the best in the FCIAC regular season.  They earn the Ralph King Cup — given to the team with the best regular season mark — for the 2nd consecutive time, 3rd in 4 years, and 4th since the award was established in 2000….

The junior varsity beat Central 3-1, on goals by Steve Smith (penalty kick), George Birch and Aaron Liu (his 1st of the year).  Congratulations to Ross McGibney’s squad, for their stellar 13-0-1 season.

It was water, water everywhere for Brendan Lesch and Central. (Photo by Carl McNair)

6 Responses to Staples vs. Central