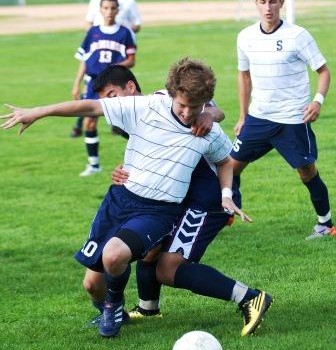 The Senators who came to Loeffler Field for the resumption of 1 of the FCIAC’s oldest rivalries bore a seldom-seen record:  2-1-6.

Within a minute, the Wreckers connected — and it counted.  Scott’s throw found Lesch, who raced forward.  He sprung Gudis, who showed great composure by settling and finishing firmly.

Krosse’s free kick in the 22nd minute led to goal #2.  It banged around McMahon’s end before Scott laid off to sophomore Lorenz Esposito, who banged it in.

The 2nd half saw another crossbar shot — this one by Esposito, off a ball from Lesch — and then, in the 56th minute, another near score off a Scott free kick.  That led to a Scott throw, which in turn led to a fierce and protracted goalmouth scramble.  Gudis finally ended the action with a firm strike.

QUICK KICKS: In other FCIAC action, Fairfield Warde handed Norwalk only its 2nd defeat of the year, 2-1….

Jake Krosse does not let a Brien McMahon Senator deter him from the ball. Frankie Bergonzi backs up the play. (Photo by Lisa Krosse)

Sean Gallagher appears to be having plenty of fun with this head ball. (Photo by Lisa Krosse)