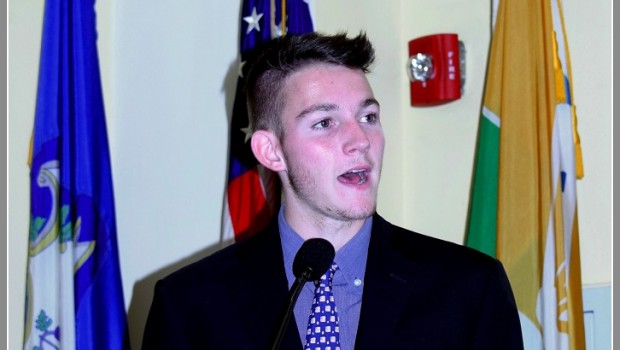 The day before his team took the field for the state tournament quarterfinals, quad-captain Spencer Daniels delivered the annual student Veterans Day address at Town Hall.

Franzis — a veteran himself — always finds an outstanding 12th grader. This year was no exception.

Spencer Daniels — a Staples soccer team captain who has earned a nomination to the US Military Academy — delivered these remarks yesterday.

“The true soldier fights not because he hates what is in front of him, but because he loves what is behind him.”  -G.K. Chesterton

Serving one’s country, motivated by patriotism, is the most honorable commitment one can make. Willingly accepting the negatives of war and battle in order to defend the freedoms we have been blessed with is, honestly, incredible.

All those who have dedicated their lives to serving our country know one thing for certain. While in service, as well as civilian life, the primary list of priorities, and the basis for nearly all vital decisions, is Mission, Men, Me, or “M.M.M.”

Soldiers, and thus veterans, have a different set of values from others. Typically, individuals are motivated to help themselves. Soldiers cannot have this mentality.

As a United States Military Academy commit, I have already begun applying this to my own life. I began to understand the true meaning of MMM after speaking with Sean Gallagher, a graduate of the United States Naval Academy, who also happens to be a former Staples soccer player. He guided me through everything he experienced that led him to follow the Mission, Men, Me structure. He did this in order to help me lead our soccer team in the best way possible.

He helped me understand that the mission, which is winning the state championship, matters most. Everything that our team does must help us achieve our mission.

The next most important thing on the priorities list is my teammates. Unhappy, lethargic and disappointed teammates would hurt us, so my second priority was to ensure that all players were happy, respected, and valued.

Finally, if there is room, I can worry and focus on myself. However, mission and men always come before me.

After learning more about MMM, we decided to order Staples soccer preseason jerseys that had no numbers, but merely just MMM. This allowed us to focus more on our mission. Instead of everyone with their own numbers, we decided to represent our team as unified. With these preseason shirts, we showed that we were not a bunch of individuals playing together, but rather a team.

We have these qualities embedded in our roots due to the brave men who served before us. Our generation still feels the immense patriotism that many of your generations have passed onto us, and that will never fade for Americans.

We still feel, although it is not tangible, the struggle and pain you went through in order to ensure our freedom, protection, and the American way of life.

So many teenagers still feel the obligation to serve, and I am proud to call myself one of these people. I, just like every other individual who chooses to serve, have service and patriotism embedded in my bones.

When I was 5 years old, I decided to have a military birthday party. I found doing PT and fighting invisible enemies far more interesting than a magician. I believe that my decision to serve our country began when I was just a little boy. One great influence on me was my great-grandfather, an Air Force veteran, who ran my birthday party.

On top of just myself, many of my classmates, even in a school with incredible wealth like Staples, choose to serve. Instead of following the “normal” path of going to college, becoming a banker, and making a ton of money, there are many individuals who want to join the military. Currently we have 5 applicants to service academies, and 7 individuals who are committed to enlisting immediately after high school graduation.

Service and patriotism run through all servicemembers’ blood, and is passed down from generation to generation. Those of you who have served have passed down, through your service, undeniable traits of patriotism and commitment to service.

While many of my classmates decide to compare cars, wealth, and other material possessions, we 12 have committed to serving our country. Without previous generations and their commitment to protecting our country, that number would be zero, and we would see those traits fade with every generation.

So for those who served, I would like to personally thank each and every one of you. Without you, I would not have to opportunity to serve. I am truly blessed, and proud to call all of you veterans of the United States Armed Forces.

Veterans such as my great-grandfather have had a significant impact on my choosing to serve. Without veterans, I would not have made the decisions that I have made.

I look forward to following in your footsteps as a leader in the armed forces. I appreciate the time you have given me, and I hope I will make all of you proud. Thank you.