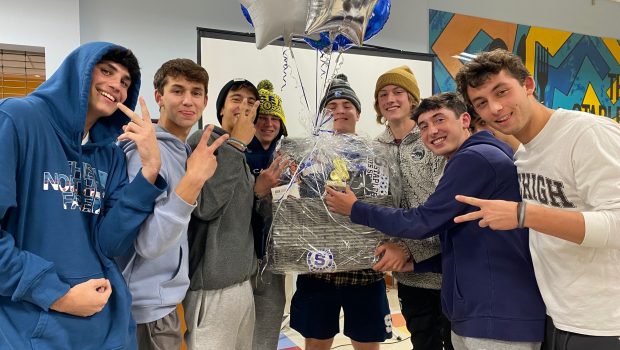 Staples soccer players are as sharp and quick off the field as they are on it.

The event raised $10,000 for the Staples program — for coaching stipends, coaching education, videography, field maintenance, scholarships, the banquet and more. Everything over that — several thousand dollars — will go to the Bridgeport Central High School boys soccer program, for equipment and coaches.

The winners — Jacob Greenberger, Jackson Hochhauser Spencer Levine, Murilo Moreno, Jaden Mueller and Caleb Tobias. plus Oliver Clachko, wrestler/lacrosse player Nick Augeri and lacrosse player/WWPT-FM sports director Max Udell — answered questions like “What was the first word spoken on the moon?” (“Houston”), what is the only mammal that can fly (bats), and what is the first game played in “Squid Game” (Red Light Green Light).

They also took first place last year during COVID, when Quiz Night was virtual. This year’s event — which drew about 150 participants — returned again to the Staples cafeteria.