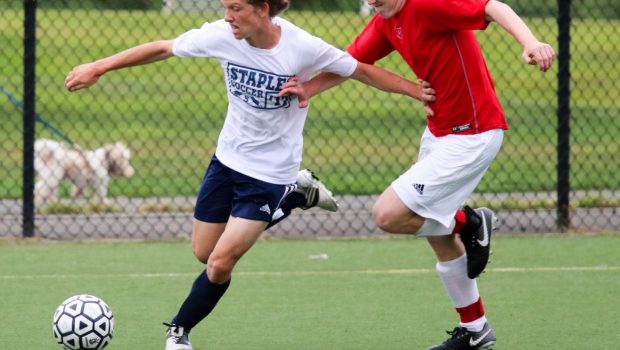 Two players who never played a minute of varsity before today — and one with limited time — staked Staples to a 3-2 scrimmage victory over Fairfield Prep this afternoon.

The match —  played in an unseasonably cold rain at Wakeman Field — saw the Wreckers in decent form, for the first outing. They possessed well, and showed sparks of creativity against a hard-working, well organized Jesuit side.

In the 5th minute, Anton Mahr and Nick DiMasi doubled on defense. They won the ball; DiMasi — a junior who played on the reserves last fall — turned inside and fired.

Five minutes later captain Matt Engler’s corner kick was cleared. But Pato Perez Elorza — a sophomore who played with the US Soccer Development Academy last year — curled a long shot past the keeper, with the outside of his foot.

In the 2nd half Mahr and DiMasi fed Vaughan Sealey. The junior — who was brought up to varsity at the end of freshman year, then played academy soccer as a sophomore — finished strongly.

“We’ve got a long way to go,” said head coach Dan Woog. “But the foundation is there. Our job is to build on that.”

The Wreckers are in action again Thursday: 4 p.m. at Joel Barlow.