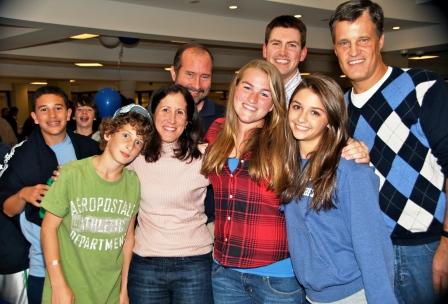 Tonight’s Quiz Night — Staples boys soccer’s annual fundraiser — drew the largest and most diverse crowd in its 5-year history, and generated the most enthusiasm.

Virtually every varsity, JV and freshman player participated — many at tables with non-soccer friends, parents, grandparents, neighbors and teachers.  When 6 rounds of questions were over — ranging from the name of the orphan in “Slumdog Millionaire” (Jamal Malik) and how many men have walked on the surface of the moon (12) to how many ribs a human body has (24) and the distance between bases on a Little League field (60 feet) — the team of Jeff Krieger and his parents, Izzy Claveloux, Colleen McCarthy, Andrew Zold and Chuck Reach finished on top of the 200-plus crowd.

Prizes were also awarded to the 2 runnerup teams (tie), and the last-place finishers.  Dozens of attendees also won raffle prizes, ranging from soccer balls and iTunes gift cards to personal training sessions and an actual pair of scrubs from “Scrubs.”

Thanks to all the Staples boys soccer parents who helped organize, score, sell food and raffle tickets, and obtain prizes — and to all the local merchants who donated gifts.

The winners! (Photo by Carl McNair)

Sophomore soccer players and friends hope this ritual will bring them luck. It didn’t. (Photo by Carl McNair)