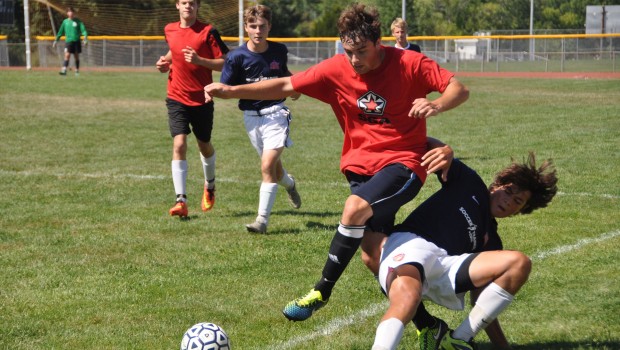 The weather was gorgeous, the hospitality great and the competition solid at the 14th annual Winton, Keane, Bittner Memorial Soccer Jamboree.

Each year, Wethersfield High School honors the memory of 3 former players killed in the World Trade Center on September 11, 2001. The Eagles always include former Wrecker Scott Coleman in the ceremony too.

Staples’ 1st match was against their hosts. Daniel Perez Elorza’s corner kick to the near post was knocked around. Daniel Brill pounced on the loose ball at the far post, and hammered home his 1st goal of the pre-season, for the only score in that 30-minute game. Wethersfield showed strongly, and should be — as usual — a force in Class L this year.

The Wreckers used their non-starters in the next 2 matches. Both were 0-0 draws, against Fermi-Enfield and Kingswood Oxford. Staples pressed the attack in both matches, and — as they did all day — prevented any meaningful shots from within the box. Keeper Brenden Price looked particularly strong on outlets, while Teddy Lawrence was in command at center back.

The Westporters’ final pre-season test is Monday. They host Martin Luther King High School — winner of 15 of the last 18 New York City public school championships — on Monday (September 7) at Loeffler Field. Kickoff is 12:30 p.m., with a picnic and volleyball to follow at Compo Beach.