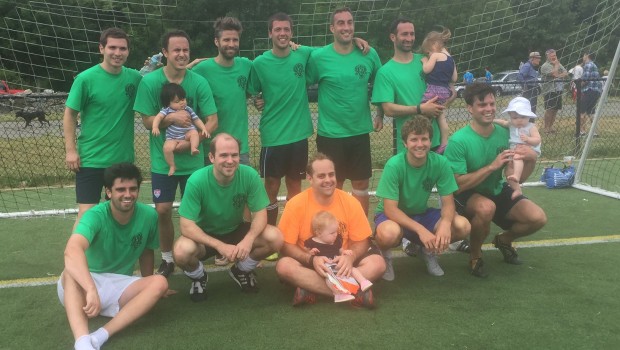 They call themselves the “Old Codgers.”

But the team whose core was Staples’ 2000 FCIAC championship team — bolstered by a few younger players, and former US national team and MLS player Kyle Martino ’99 — defended their Preston Hirten 7-v-7 championship this morning, at Wakeman Park. The Codgers let a 2-0 lead slip from their grasp, drawing 2-2 after regulation time. But they earned their 2nd straight title in the 1st  sudden-victory penalty kick, after deadlocking 4-4 with a team made up primarily of Preston’s former Beachside teammates.

Two teams of current Staples players also competed. Both just missed out on advancement. There was also a team of very recent graduates, former players and those who never played Staples soccer. They did some damage too.

The 7th annual event honors the memory of Preston Hirten ’07, the former Wrecker who died during pre-season of his junior year at the University of Mary Washington. As always, many UMW alumni made the trip from all around the country, for a weekend of soccer competition, food and memories. The most recent Staples grads fielded a squad too. One Staples squad at the Preston Hirton tournament…