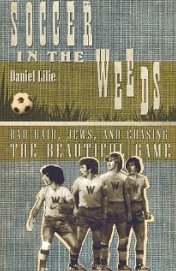 Staples soccer has already been the main subject of a 2 books: Goals and Glory, Dan Woog’s history from 1958 through 1995 (now available as links on the “History” tab at StaplesSoccer.com), and The Autumn of Our Lives, Fred Cantor ’71’s account of his season spent with the 1995 Wreckers.

Staples also features prominently in Woog’s most recent book, We Kick Balls: True Stories from the Youth Soccer Wars. And it’s part of Eric, Doris Lund’s memoir of her son, a Brien McMahon player who died of leukemia.

Now there’s another entry in the ouevre. Daniel Lilie’s Soccer in the Weeds: Bad Hair, Jews, and Chasing the  Beautiful Game is an account of growing up as a soccer player in the 1970s. Though he went to Westhill High School, Staples soccer played an important role in his life.

Lilie devotes a number of pages to “superstrong” Staples — a team with a “mystique,” and a “verdant, expansive campus.” Lilie recalls being intimidated by the Wreckes’ warm-ups (both their gear and the way they got ready for a match), as well as a game field that was “like Wembley.”

He recalls players like the “monsters” Steve Dickstein, Andy Simon and Charlie Perlwitz — “all about 6 feet more and skilled” — as well as “the arrogant and combative Murphy brothers, Ken and Kevin…fair and angelic looking, but direct and skilled players who played angry.”

Phil Moen was “a sylph of a guy who was so fast and elusive that our entire back 4 were at his mercy.”

a brilliant coach. He had great players, but as a unit, Staples played a style that was as close to Dutch total football as I have ever seen, certainly from a high school team. They were interlinked, superfast blond dervishes. They played triangles to perfection, drawing us into a flat defensive scheme and continually shooting the gaps with perfectly weighted passes.

Lilie developed an “obsession” with Staples soccer, he says. “What they had, in addition to a formidable soccer team, was an esprit de corps. They were a team, with a real coach, who understood tactics and training and technique.”

Lilie spends many pages talking about Westport’s early Recreation Commission teams; the town itself; the 1,000 or more fans who turned out for big games; and many of those Staples-Westhill games themselves. (In the 1975 state tournament, the Vikings became the 1st team to score a non-penalty kick goal against Staples at home all year.)

Later in the book, Lilie talks about summer soccer — including Westport’s legendary U-23 Bridge Grille team, as well as the NASL career of Paul Hunter ’73.

The book is not just about Staples soccer, of course. Here’s a blurb on the back — from fellow author Fred Cantor:

Lilie illuminates why soccer has a hold on so many people around the world…Part memoir and part essay, the book is a fascinating journey through 4 decades of both American soccer and American society.

Click here to order Soccer in the Weeds: Bad Hair, Jews, and Chasing the Beautiful Game.