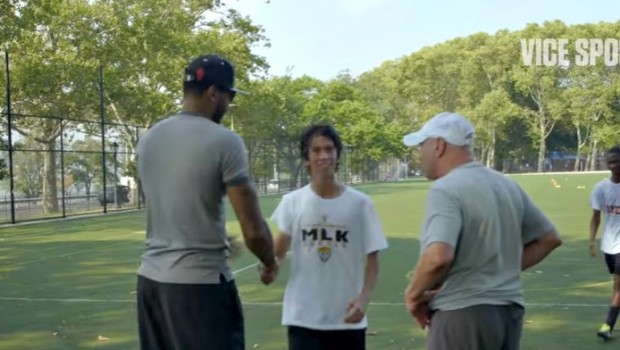 MLK is well known in Westport. Every Labor Day for the past few years, they’ve played Staples in a pre-season scrimmage. After, the 2 squads head to Compo for a picnic (and beach volleyball).

Now, MLK is in the spotlight again. The 9th episode of “Stay Melo” — Carmelo Anthony’s VICE Sports series — has just been released. In it, the New York Knicks star continues to explore street sports and culture around the world, by meeting some of the MLK players. They hail from around the world. Every one has an intriguing story to tell. Through them, Melo shows how sports saves lives.

As Coach Martin Jacobson says, “there are 2 reasons why we’re on earth: to learn life’s lessons, and help others.”

The “Stay Melo” video is fascinating. Click here to watch it — then watch MLK in action next September, at Loeffler Field.