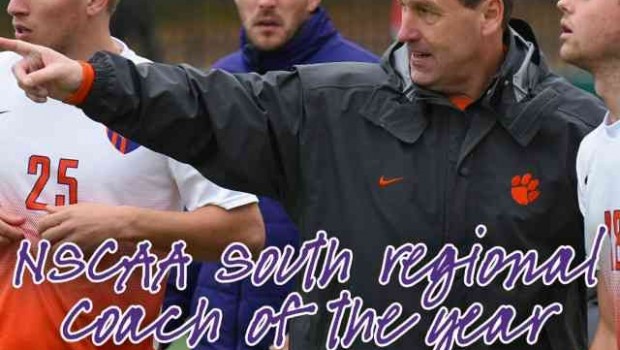 Now Noonan has been named the National Soccer Coaches Association of America South Regional Coach of the Year.

One day after leading his No. 2 national seed Clemson men’s soccer team to a berth in the NCAA Elite Eight with a 3-2 victory over UC Santa Barbara, Noonan earned his regional honors. The national Coach of the Year will be announced at the NSCAA convention in January.

Noonan’s Tigers are 17-2-2 on the season. They’ve reached the NCAA quarterfinals for the first time in 10 seasons, and just the 13th time in program history.

The team — which beat UC Santa Barbara 3-2 this weekend, to reach the Elite 8 — are national leaders in 6 offensive categories this year. That includes 3rd in total goals (51).

Since his first season with Clemson in 2010, Noonan has helped put the program back on the national scene. The team has earned an NCAA Tournament berth each of the last 3 seasons, reaching the first round in 2013, the Sweet 16 in 2014 and the quarterfinals — at least — this year. The Tigers host Maryland this Friday.

After helping Staples to a state championship in 1978, Noonan was as 4-year starter at Middlebury College. He was twice named to the All-America team. He then played professionally in Sweden, and indoors in the US.

Before Clemson, Noonan spent 15 years at Brown University. He compiled a 160-77-31 record, including 10 NCAA tournament berths (reaching the quarterfinals twice), and 8 Ivy League championships. Before that, he was the winningest coach in University of New Hampshire history. Noonan started his college coaching career as an assistant at the University of Vermont and Bates College. His first head coaching job was at Wheaton College.

Noonan has not forgotten his Staples ties. In 2013 he participated in the Wreckers’ High School and Academy forum.