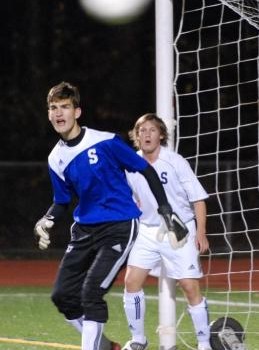 Michael McCarthy — the Washington University-bound goalkeeper who helped lead Staples to state and FCIAC championships last fall — is one of 4 winners of the prestigious Marshall Raidbard Scholarship.

The $1,500 award — presented by the Connecticut Junior Soccer Association’s Southwest District — goes to players who have been involved with the district.  Michael has been both a player and referee.  The application process includes an essay.

Michael is one of 4 winners this year.  Another awardee — Sarah  Frassetto of St. Joseph High School — is the daughter of Don Frassetto ’78.  Interestingly, he is a former Staples teammate of Michael’s father Stuart.  She will attend Fairfield University this fall — and be a teammate of Alli Walsh, whose brother Connor is currently a Wrecker varsity keeper.