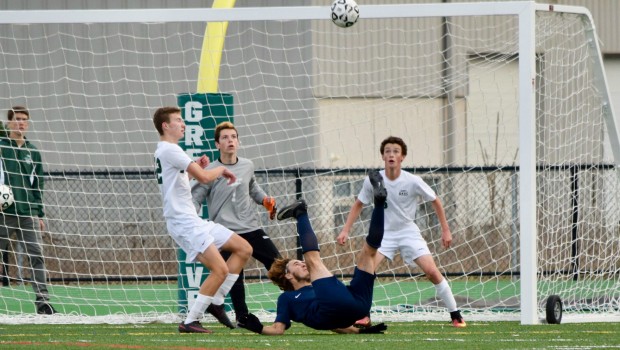 Match Report: State Tournament Round of 16, Staples vs. New Milford

Staples and New Milford is not one of those longstanding boys soccer rivalries.

The 2 teams have met only twice before. The most recent time was in 2009 — the state “LL” finals, at Ridgefield. The Wreckers pounced on the Green Wave early, en route to a 4-0 championship victory.

Despite the lack of familiarity, Staples respected the northerners. They’d had a solid season in the SWC; they were ranked higher (#5) than the Wreckers (#21). And even in losses, the Wreckers knew their foes played right to the end.

Yet the blue-and-whites also brimmed with confidence. If they played their game, they told themselves, they’d continue the roll they’ve been on.

Staples started hot. They earned a free kick just 40 seconds in. In the 4th minute Anton Mahr slammed a shot off the post. The rebound just missed.

Four minutes later, Thomas Nealon — the hard-working striker — delivered a long free kick. Teddy Lawrence got a great head on it. It did not score — but it got his side a corner kick.

Matt Engler played a short corner to Daniel Reid. The junior got the ball right back, then laced a laser cross into the box. Josh Berman power-headed it home. It was the captain/defender’s signature play — and it has been since sophomore year.

Reid had one of the toughest assignments on the field — marking and going forward — and he did it with aplomb. With fellow midfielders Engler, Jannis Dietze and Spencer Daniels, they kept the Wave from penetrating beyond midfield.

On the few times New Milford got through, Lawrence and Sam Kantor channeled them outside. And on the very few occasions when that did not work, Chris Martenson was there to slam the door firmly.

Behind them all was All-FCIAC keeper Ziggy Hallgarten. His 13th-minute punt to Nealon was touched along to Mahr, who barely missed.

Then Dietze turned and shot; he too missed connecting by inches.

Mahr had a 2nd shot of the day rattle the crossbar. It came from a Nealon flick, which Daniels laid off. Then Lawrence and Kantor found Will Birch. His quick turnaround shot was yet another near miss.

In the 31st minute, Nealon’s pressure again paid off. He stole the ball, and immediately hit Mahr. This time his shot — a long ball from 25 yards out — was true: a chip over the keeper.

Mahr kept working. He forced a corner kick, which led to another tremendous Wrecker effort in front of the net.

As predicted, the Green Wave did not go easily. Their 2nd half effort was strong. But Staples — fit, hungry and determined — continued to limit their looks. Highlights after intermission included Martenson’s stunning back heel move to take his team out of danger; one punch save by Hallgarten, and another in a crowd; and bicycle kicks by Lawrence and Matteo Broccolo. The former was particularly impressive, coming on a rebound off the crossbar.

For the 3rd time in 5 matches, the Wreckers had a goal called back by offsides. This one was started by Stephen Rowland, and finished by Berman.

It was a well-played, controlled and communicative victory for Staples. Teddy Lawrence bikes it at New Milford. It did not miss by much. (Photo/Armelle Daniels) Will Birch and Stephen Rowland enjoy the victory. (Photo/Armelle Daniels)