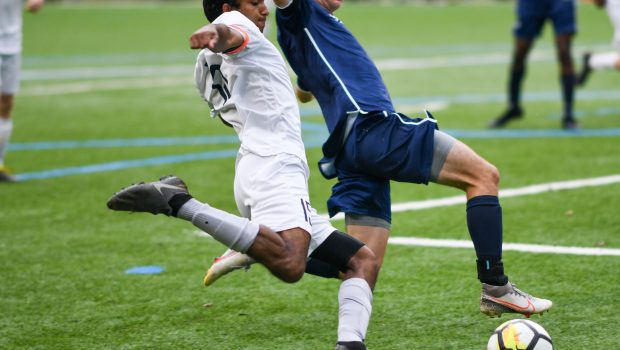 It was that kind of day.

The Wreckers started out well on Wilton’s very wide, very nice Kristine Lilly Field. Surya Balaji, Ben Douglas, Jackson Hochhauser and Ben Foster worked the ball well out of the back.  Zach Pulichino — making his first varsity start, in place of the injured Murilo Moreno — was poised at central midfield. Jack Douglas complemented him there. Alan Fiore worked hard on both sides of the ball. Staples got players into the box.

But the hosts drew first blood, on a 16th-minute header by Zac Abud off a free kick by Nathan Bennett.

The Westporters went right back to work. In the 38th minute, Jack Douglas sent Matt Jordan through. He was saved well.

Twelve minutes into the second half though, the Warriors doubled their lead on a cross from the corner. They got 2 more in a quick span midway through, to ice the game.

The blue-and-whites — including Jaden Mueller, Hunter Smith, Kyle Rotolo, Bruno Guiduli, Haran Eiger and Aaron Jaffe, all making their varsity debuts — never surrendered. But they’d dug themselves a deep hole, and their good chances were scooped up by the keeper.

Staples’ hopes for revenge — and the elusive first win of this very different season — will wait until Monday. The Wreckers host Wilton. Kickoff is 4:30. FINAL SCORE: Wilton 4, Staples 0. SEASON RECORD: 0-2-1.