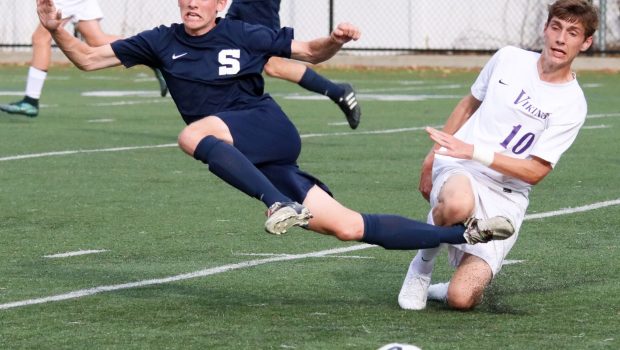 It’s that time of year. FCIAC teams are in a dogfight for postseason spots. Every match brings a team closer to one of the 8 positions — or further away.

Staples (5-2-2) arrived at Westhill (4-2-2) for a key matchup this afternoon. The Vikings’ long, narrow turf is always a tough place to play. But none of the Wreckers knew that. The last time they were there — 2 years ago — they played on the back football field. This was new territory for every player.

Callum Wisher was a late injury scratch at left back. Nick Ambrose switched over from the right; Gabe Baltierra took over on the left, and Staples did not miss a beat. Fellow defenders Chris Martenson and Ryan Fincher plugged the middle, repelling the lion’s share of Westhill’s frequent air attacks.

Timmy Liles’ early shot off Matt Engler’s feed set the tone for the Westporters’ offense. Will Birch, Patricio Perez Elorza, Liles and Anton Mahr combined for another threat. But through the first 30 minutes, the match stayed scoreless.

Then, Martenson found Vaughan Sealey out of the back. The junior held the ball well, then found Liles on the left. He battled through one, two, finally three defenders. He got himself in the clear, but did not rush a shot. Finally he fired, low and to the far post — his signature shot. It rippled the net, for a hard-earned 1-0 lead.

Birch opened the second half with a ball to Mahr, which was headed high. Another header — at the other end — was Fincher’s, saving a potential equalizer.

In the 49th minute, Engler and Birch combined to find Liles. His blast was saved brilliantly by keeper Natanel Aybar.

For the next 10 minutes, the Vikings had the run of play. But starting in the 65th minute, the very fit Wreckers turned the game around.

Birch volleyed a shot into the box. A mis-clearance by Westhill banged off Azam Plummer. The junior pounced on the loose ball, then banged it home.

Five minutes later Liles looped a ball from the left, across the box to his brother Sam. The younger Liles laid off to Plummer, who slammed in his second strike of the day.

Not to be outdone, Timmy Liles netted his 2nd goal of the afternoon 5 minutes after that. He wheeled and dealed in the middle, before finishing smartly.

The final minutes also included a great save on an Engler blast.

“Those are the ways we like to put our mark on the game,” said head coach Dan Woog. “As Chris O’Dell said, the way we played in the beginning set us up for the end. We’re making progress, game by game. Now we get ready for Stamford.”

The Black Knights began the day tied with Trumbull for the Western Division lead. Both were 6-2-0. This afternoon though, Trumbull lost 1-0 to Greenwich.

QUICK KICKS: The reserves fell behind 1-0 to Westhill, on an early breakaway. With 5 minutes left in the match, Jake Porter drew a penalty kick. Brad Cox buried it, to equalize. In the final moments Wilson Daniels biked a shot from 35 yards out. The keeper saved the potential game-winner masterfully, shoveling it over the top…. He’s not the tallest guy – but Nick Ambrose outjumps everyone. Backing up the play are Steven Frost, Ry Cohen and Gabe Baltierra. (Photo/Alan Frost) Matt Engler gives it his all. (Photo/Alan Frost)