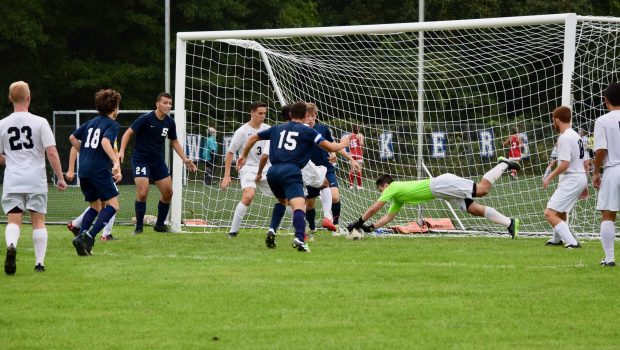 Traditionally, the Wreckers have had 2 nemeses: Homecoming and Trumbull.

The Eagles too have had the blue-and-whites’ number. For the past decade they’ve had their way with Staples, dominating them physically and on the scoreboard.

Today looked like the perfect storm: Homecoming and Trumbull. Add a couple of players out with injuries and travel, and today could have been another of those days.

But both sides brought 3-0-1 marks into the match at Loeffler Field. And the Wreckers brought their A-game.

Working together to remain focused — and melding 2 players making their first-ever varsity starts into the mix — they gave the large crowd on The Hill a match worthy of its billing.

Trumbull drew first blood, 13:30 in. A long ball was kept in play by Carrigan Cullinan at the end line; a crisp cross found Andrew Restrepo’s head, and the back of the net.

The Eagles were keeping the Wreckers at bay. But Staples was doing the same to Jason Weinstein, the striker who early in his senior season has already set the school’s career scoring record. Midfielders Matt Tanzer, Josh DeDomenico, Nick DiMasi and Vaughan Sealey worked together well; with Wilson Daniels and Sam Liles helping out on the flanks, and defenders Rob Diorio, Nick Ambrose, Surya Balaji and Gabe Baltierra behind them, the Wreckers played the tight, shifting defense they need.

The Wreckers continued to press. Liles added another excellent tackle. Tanzer launched a dangerous free kick. The hosts tried to dictate the tempo, and often succeeded.

Keeper Ry Cohen’s hands were sure, and his punts long and true. He made one superb save on an inswinging corner kick, punching it wide.

But a great save on a Pendarakis shot kept the Eagles ahead.

Suddenly — with less than 5 minutes left — Trumbull fouled in the box. Staples stepped up for their first penalty kick of the year.

Keeper Prizio guessed correctly. His kick save kept his team on top.

The Wreckers refused to surrender, fighting to the end. It was not enough.

But it was also not a Staples effort against the Eagles like the past 10 years.

And it was also not a typical unfocused Homecoming match.

The Wreckers were laser focused throughout. And — their coaches and fans hope — they’ll keep that focus going, through the upcoming very tough week. FINAL SCORE: Trumbull 1, Staples 0.

The freshmen notched another shutout, 1-0 at Trumbull. Will Adams chipped to Murilo Moreno; he chested it down and laid off to Aidan Mermagen, who one-touched a shot into the corner. Moreno and Mason Schaefer played excellently. Yesterday coach Chris O’Dells side shut out Fairfield Warde, on strikes by Adams, Mermagen, Jaden Mueller and Chase Hynes. Adams and Jackson Hochhauser controlled the middle, while Josh McColl ruled defensively. Vaughan Sealey played strongly on both sides of the ball against Trumbull. (Photo/Armelle Daniels)