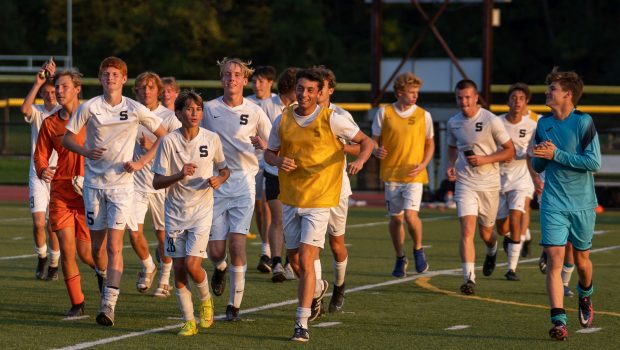 St. Joseph is mired near the bottom of the FCIAC standings. But 2 results last week had the FCIAC talking.

First, they led Brien McMahon 3-1, with 5 minutes remaining. A furious Senator 3-goal barrage — including the game-winner with 40 seconds left, off an intercepted pass following the kickoff — handed the Cadets a very tough loss.

Two days later, St. Joe’s tied Darien 1-1. The Blue Wave are the only team to beat Staples this year.

But the Wreckers are on a roll. Four 1st-half goals, and 3 more in the 2nd, gave the Wreckers a 7-0 win. It was their 2nd straight victory by that margin, following Wednesday’s win at Central. Combined with Monday’s 4-1 defeat of Stamford, that’s a solid, 9-point week for the blue-and-whites.

They cannot rest on their laurels, though. Tuesday brings the biggest test of the rapidly ending regular season. Staples (8-1-3, 2nd place in the FCIAIC ) hosts 9-1-2, front-running Norwalk. Kickoff between the longtime rivals is 4 p.m., at Loeffler Field.

Today, it took just 10 minutes for the blue-and-whites to score. Jackson Hochhauser’s long free kick led to a goalmouth scramble. Will Adams touched the ball to Jaden Mueller. Dylan Hoke then finished from close range.

Shackelford got his second assist not long after. He received the ball from Will Adams, and fed Reese Watkins. It was Shackelford’s 4th assist in 2 matches — and the 5th straight game in which Watkins has scored.

Defender Jack Foster’s long range shot — following his throw-in, and a return pass from Adams — was deflected in by a defender. That made the score 4-0, just before intermission.

Despite the edge, the Wreckers were not pleased at halftime. They had not played their possession style of soccer, and the back line had been sloppy.

The 2nd half was much better. The non-starters put on a show, with quick passing, smart movement off the ball, and plenty of width.

In the 70th minute Sam Vannart and Matthew Jordan combined well. Ryan Thomas was there to finish, for his 3rd goal in 4 games.

Central defender Ben Douglas then roared forward. He worked a neat give-and-go with Jordan, then ripped a shot for his first varsity goal.

Vannart ended the scoring, with his won first varsity strike. The play began with Marius Ekeberg, and continued with a blast by Jordan that caromed off the crossbar — his 3rd straight assist.

“Earlier in the season, when we were playing well but not scoring, we kept saying ‘The goals will come,'” says head coach Dan Woog. “They’re coming now. But Norwalk will be a much tougher test. That could easily be a 1-goal game, either way. Both teams are playing with confidence. It should be a great match.” FINAL SCORE: Staples 7, St. Joseph 0. SEASON RECORD: 8-1-3.

QUICK KICKS: For the 2nd match in a row, all healthy players saw action ….

The last time Staples scored 7 goals in 2 games was in 2012. Their were back-to-back 7-0 wins that year too, against Trinity Catholic and Harding ….

The last time the Wreckers tallied more than 18 goals in 3 consecutive games was in 2006. Those 22 goals were 8-1 over Trinity Catholic, 6-2 against Greenwich and 8-0 over Central. Dylan Hoke starts the Wreckers off with a goal at St. Joseph. (Photo/Mark Sikorski) Brewster Galley plays out of the back. (Photo/Barry Guiduli) … followed by the traditional salute to fans. (Photo/Barry Guiduli)