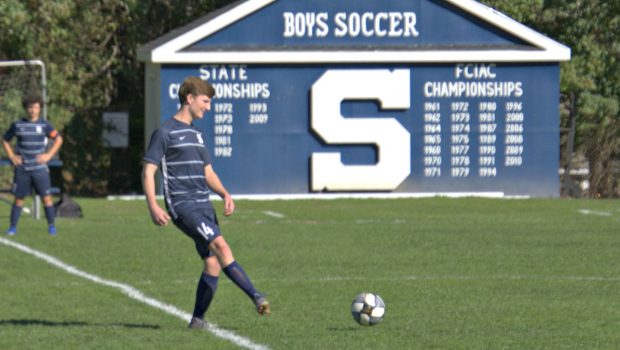 Staples celebrated Senior Day today in a special way. Callum Wisher — the defender who has missed the entire season with a hip injury — took the field, and kicked off. It was an emotional moment for the 3-year varsity player, who would have played a major role on this year’s team. Despite his injury, Wisher has been at every game, and nearly every training session.

Today’s match offered a chance for the Wreckers to pick up 3 important points, in the tight race for an FCIAC playoff spot. Despite an 0-2-2 streak, in which they scored only 1 goal, the blue-and-whites dropped only 1 spot in the standings. They stood in 7th place; the top 8 make the league tournament.

They started out strongly. The Westporters controlled the tempo, and attacked on the flanks. They ripped a shot off the crossbar. Staples’ press was working well.

In the 24th minute, Surya Balaji delivered a long cross out of the back. Murilo Moreno — who has been playing particularly well recently — was in perfect position to knock it in.

The game took a different turn a few minutes later. Two yellow cards — one for profanity, the other for unsportsmanlike contact after the first card — forced the Wreckers to play the final 50 minutes a man down.

They did it well, keeping possession for large swaths of time, and hunkering down defensively when they had to. It was not the Senior Day many in the large crowd on The Hill expected — but very little in an FCIAC soccer season ever goes according to plan. FINAL SCORE: Staples 1, St. Joseph 0. SEASON RECORD: 6-4-3.

The reserves handled St. Joseph 6-0, with many players stepping up. Jaden Mueller and Matt Shackelford — up from the freshmen — scored 2 goals each. Gabe Chinitz also tallied, and St. Joe’s also scored an own goal. Coaches Russell Oost-Lievense and Reilly Lynch cited Sam Vannart, Matt Genser and Player of the Match Spencer Levine for their strong play.