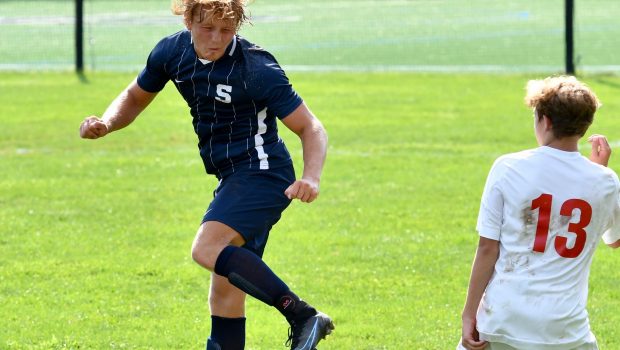 The Wreckers packed The Hill for this morning’s Loeffler Field home opener. Coming  off a 2-0 win at Ridgefield, they faced a spirited New Canaan side.

The Rams showed 5 in the back, and played out of it well in a style similar to Staples. The Wreckers’ back line, including Ben Douglas in the middle and Hunter Smith taking charge on the left, kept the visitors at bay for much of the half.

Avery Mueller’s 20th-minute attempt flew high. Staples earned 5 corner kicks late in the first half, but could not convert.

Zach Gorin provided some sparks as the second half began, but play was a bit less organized for both sides. The Rams had a chance in the 55th minute, with a high free kick in the box. Staples came right back, but Jonny Costello was stripped at the last minute.

In the 61st minute, a solo effort on a slithering run into the box found side netting, on the far right side.

The blue-and-whites came right back. Douglas played a dangerous ball into the middle, Ethan Cukier fed Dylan Hoke, whose shot was blocked.

The Wreckers ramped up pressure, as New Canaan dropped into a defensive mode. But they threatened enough offensively that Staples could not commit everyone to the attack. A slicing ball with 6 minutes to go nearly made it 2-0. With 2:30 left, keeper Nick Sikorski saved well.

Play grew a bit chippy as the seconds wound down. Staples thought they had the equalizer 34 seconds from time, but a deflection by Lucas Carpi’s head off Alex Laskin’s shot flew over the crossbar.

The Wreckers will reset for Tuesday’s match. It’s a big one: 5 p.m. away, against always-tough Greenwich. FINAL SCORE: New Canaan 1, Staples 0. SEASON RECORD: 1-1-0.

QUICK KICKS: The reserved shut out New Canaan 3-0. Andrew Oppenheimer opened the scoring before halftime, with a first-time strike from Sebastian Rodriguez. In the 2nd half, Chase Watkins went through to make it 2-0. In he 70th minute Luca Caniato drove to the 18 and fed Colin Stretton, who was taken down in the box. Caniato drilled the penalty kick home….

The freshmen downed New Canaan 4-1. Owen Powell led the way with 2 goals; Michael Scotto and Brendan Allen added one each. Coach Elisee Joseph cited Powell and Allen as Players of the Match.